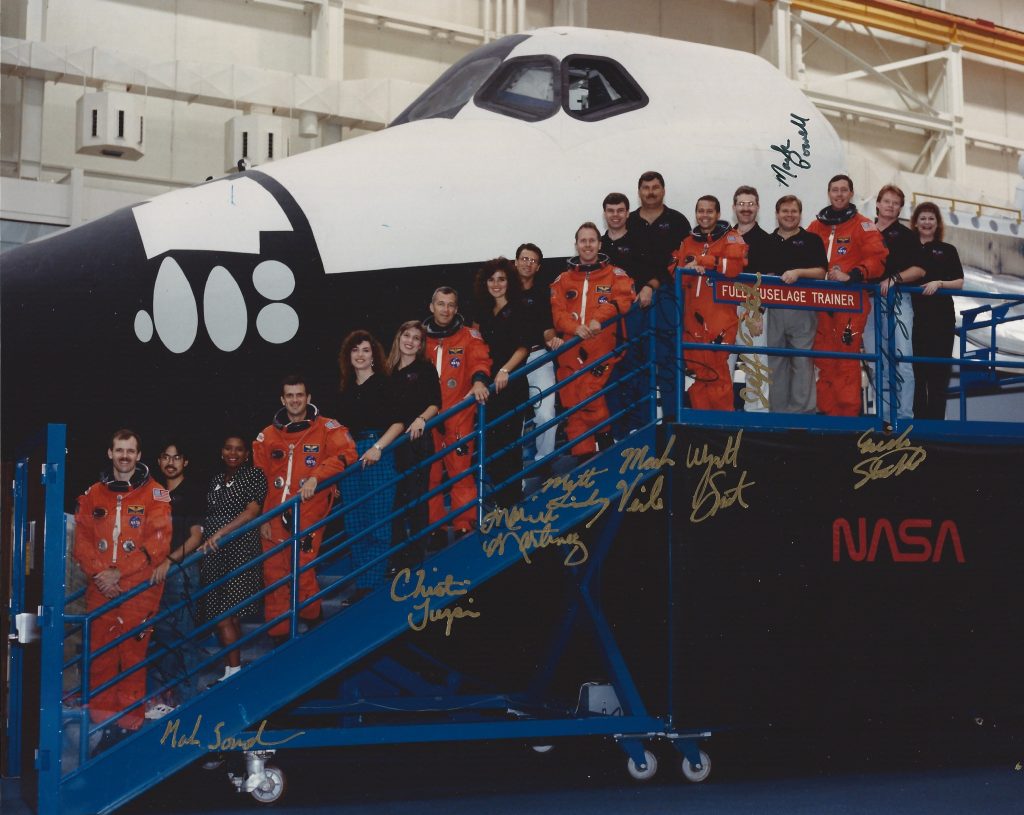 The crew of STS-68, Space Radar Lab 2, flying Endeavour. Throughout our training syllabus, we were guided through the frantic schedule of classes and simulator sessions by our training team. Without their expertise, we would never have been ready in time for our planned Aug. 18 launch date.

The FFT trainer, once in Bldg. 9, is now at the Seattle Museum of Flight, still bearing the scuff marks from the boots of dozens of crews sliding down the exterior using their “Sky Genie” escape ropes. Egress training usually took half a day or so as we ran through all the orbiter escape modes: on the launch pad, on the landing runway at a remote site, in a crash landing, and exiting quickly from the overhead windows after discovering a jammed side hatch. 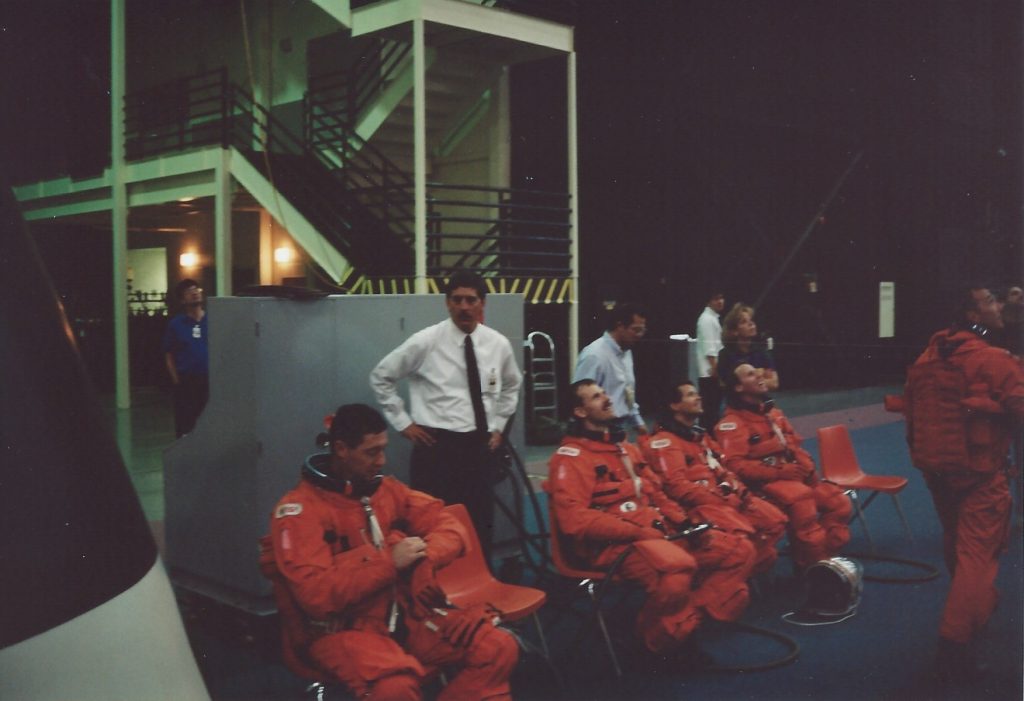 STS-68 crew in Bldg 9 for egress training, May 1994. Left to right: Mike Baker, Steve Smith, Dan Bursch, Tom Jones, and Terry Wilcutt standing. Jeff Wisoff is up there rappelling down the orbiter mockup, out of view. 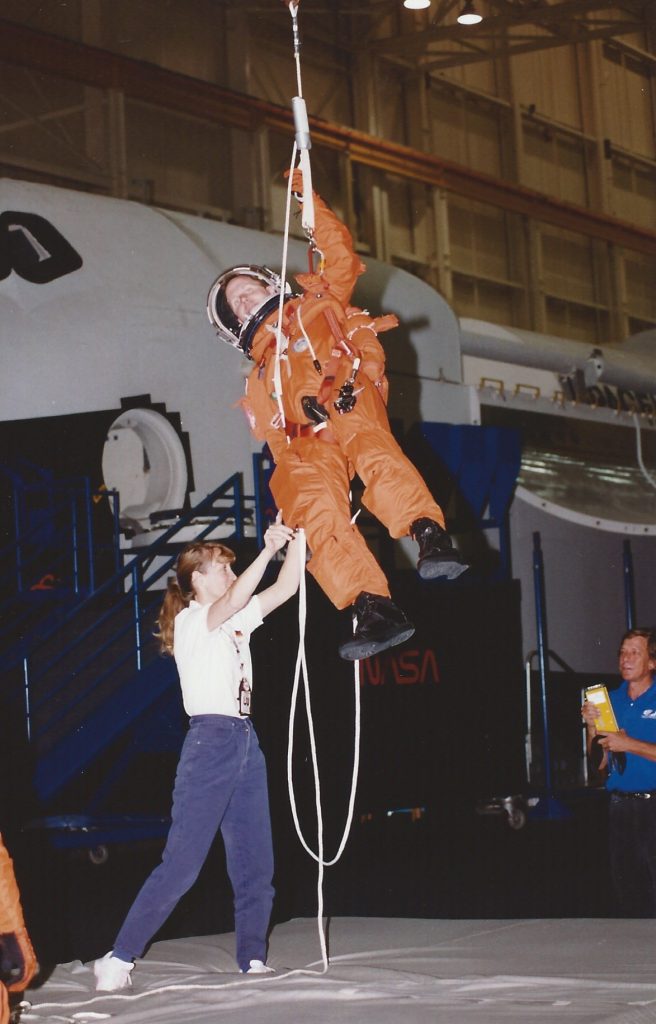 Here I descend from an overhead crane rigged to let us practice using the Sky Genie to lower ourselves safely.

The first exercise is to use the Sky Genie to descend from the orbiter side hatch, a scenario that might take place in a forced landing at a remote airport with no ground support crew available to help us escape the cabin. 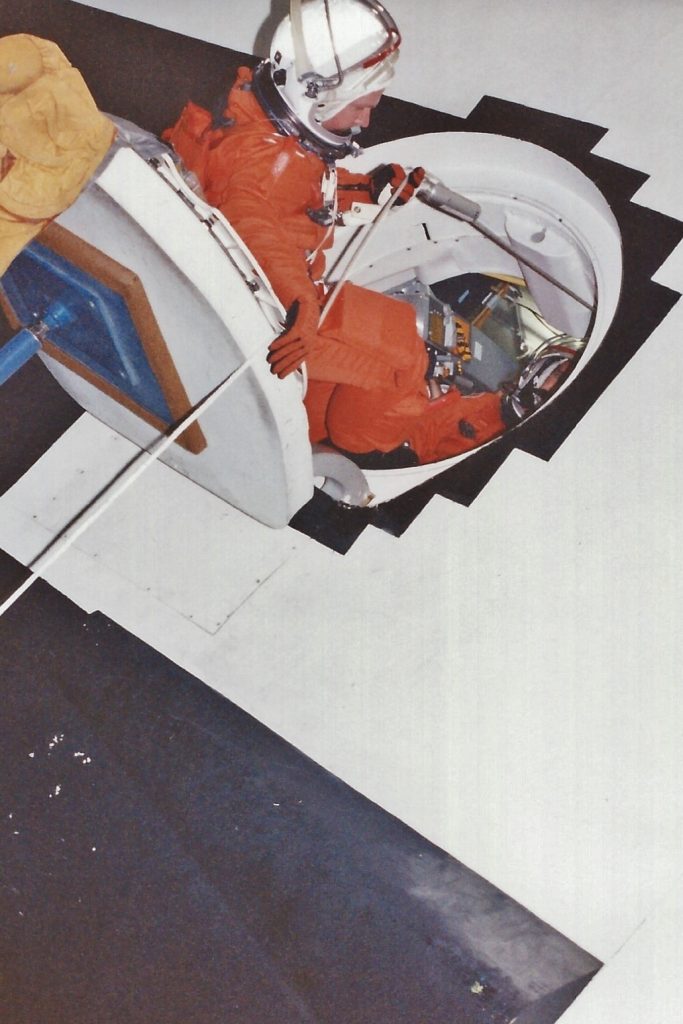 Tom begins descent from orbiter side hatch. May 1994, 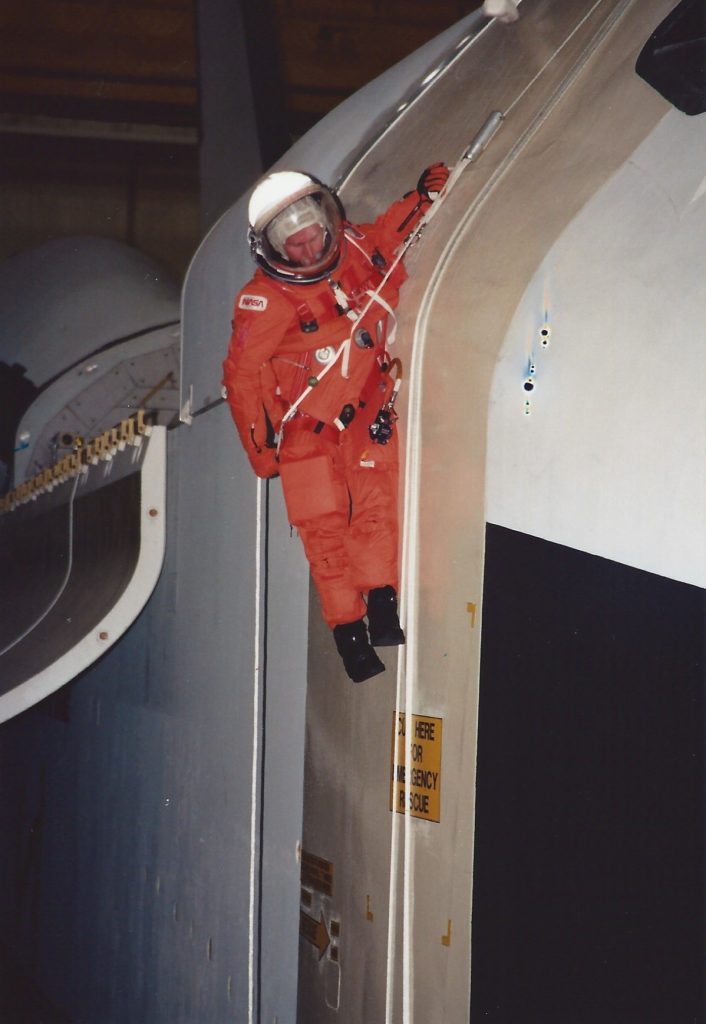 Tom descends side of the FFT during egress training for STS-68. Believe me, from the top of the orbiter, it sure looks a long way down. 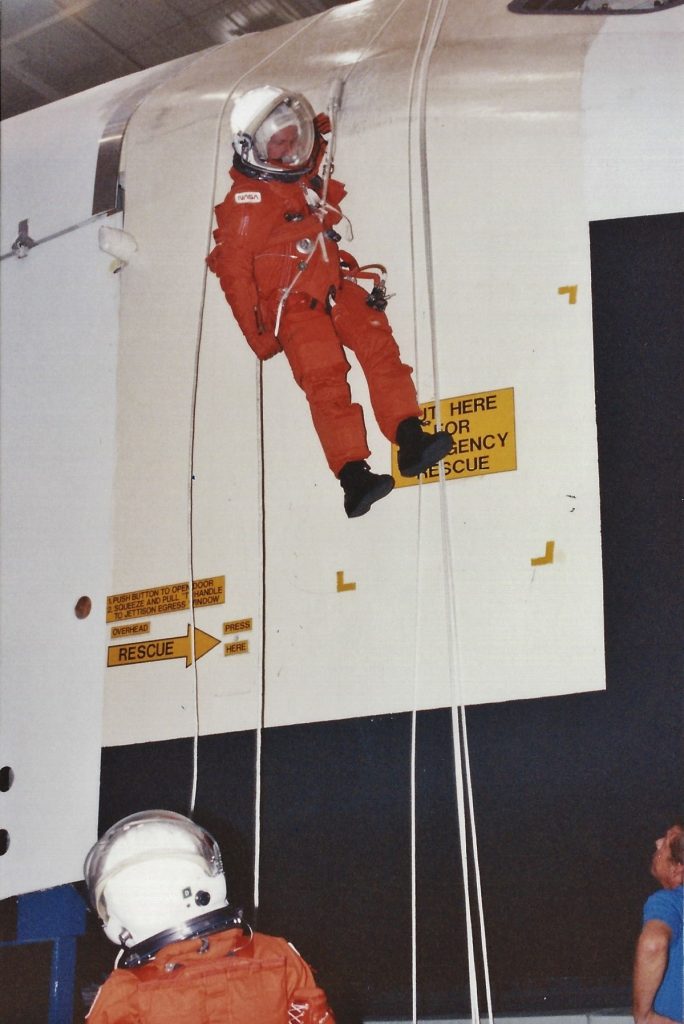 Tom slides down orbiter starboard side on Sky Genie. One of my crewmates critiques my rappelling skills. 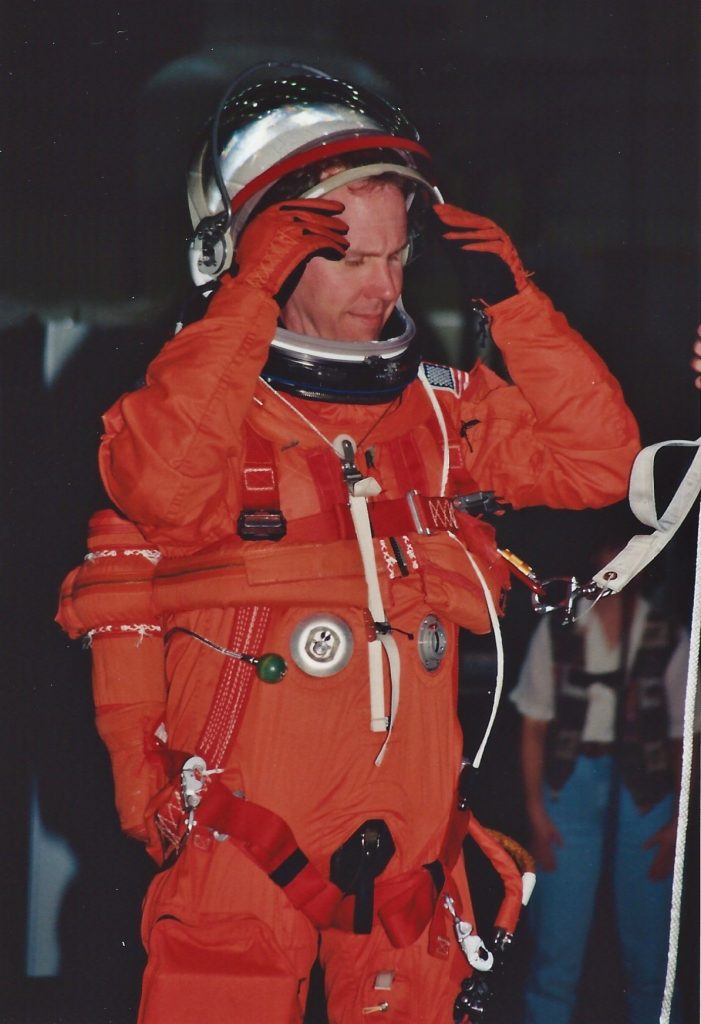 Tom raises helmet visor after descent from orbiter. With the visor closed, I breathed through an emergency oxygen supply bottle in the parachute harness, activated by that “green apple” knob on my right side. 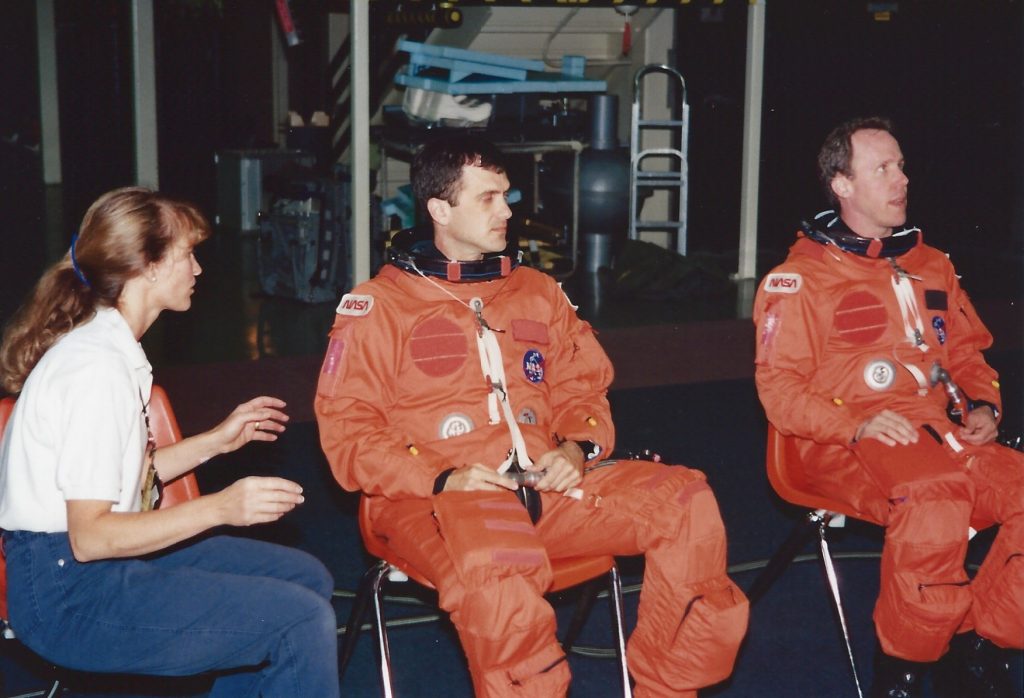 Jeff Wisoff (center) with Tom Jones and instructor during egress training. We are waiting for our turn at the Sky Genie exercises. 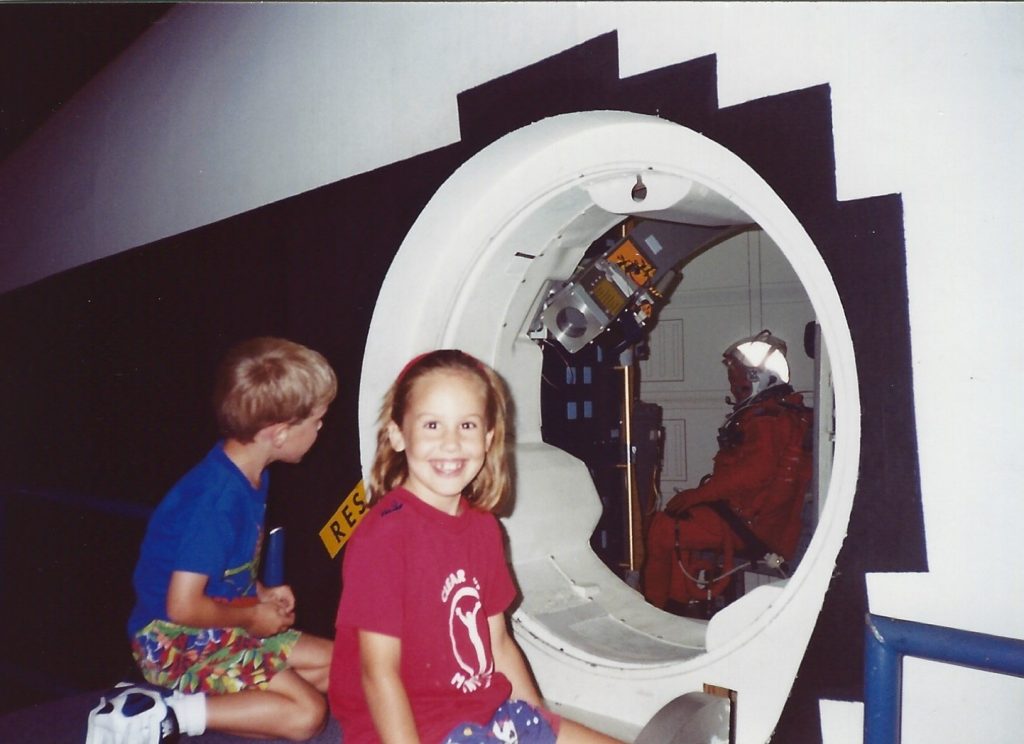 Bryce and Annie look at Tom inside the FFT middeck as Tom waits for the next egress exercise. 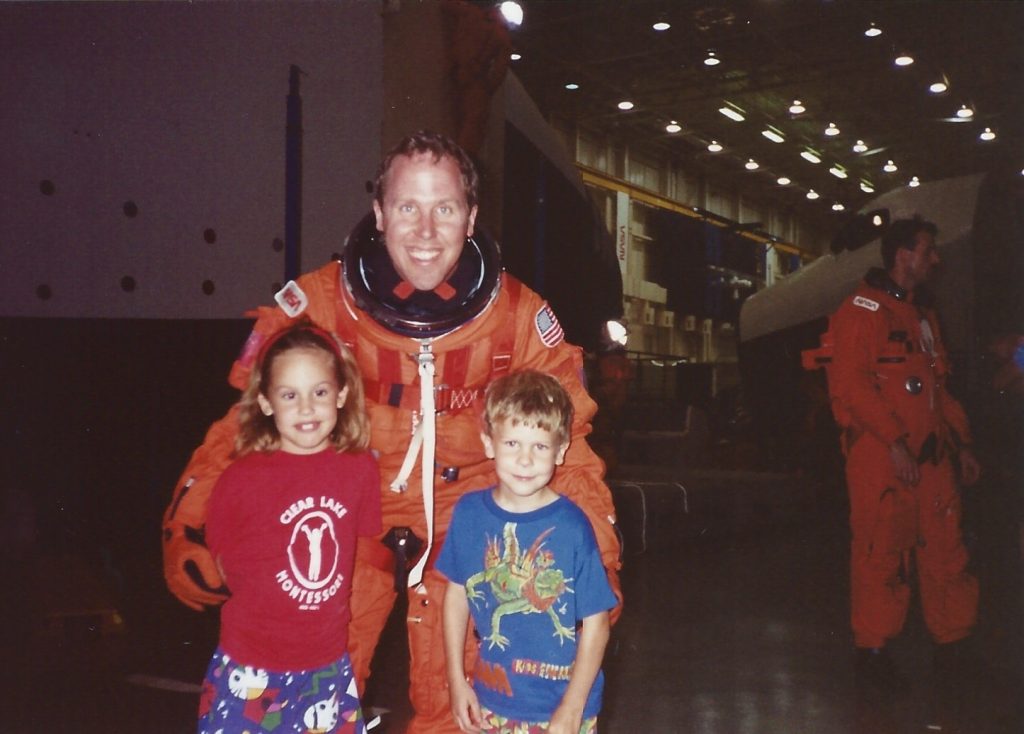 Annie and Bryce with Tom in Building 9. That’s the FFT at left. Steve Smith is at right. 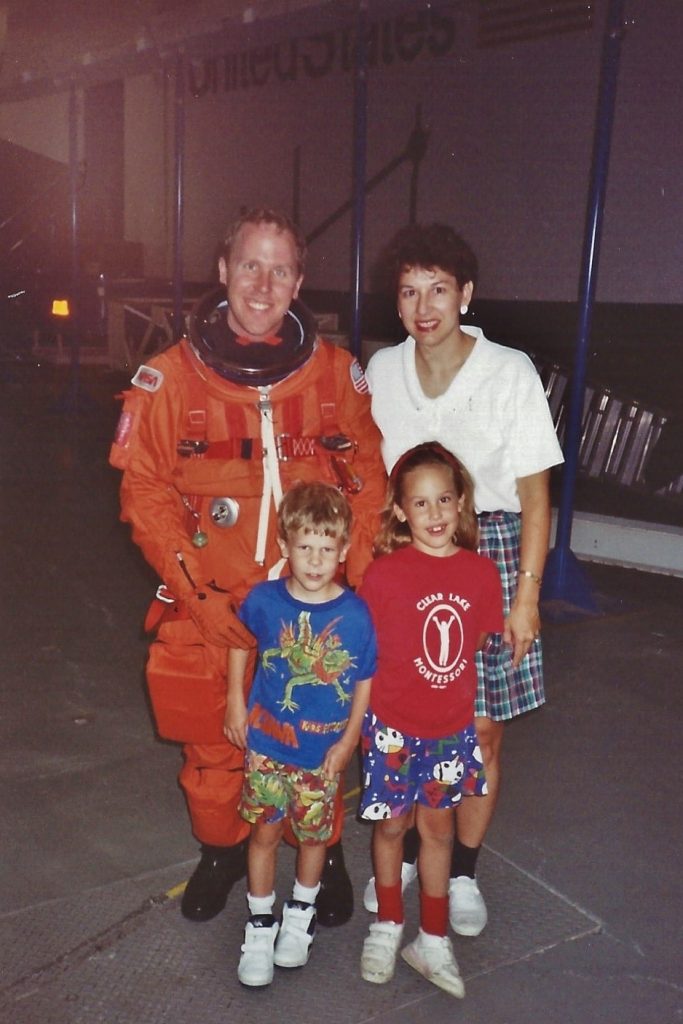 Liz was there, of course, giving Bryce and Annie a chance to watch their dad’s egress training (May 1994).

This egress session was just a month after I’d returned from STS-59. The quick turnaround for another flight left our family’s heads spinning. The twin flight assignments seemed like a great opportunity at the time.

We spent dozens of hours training for orbital operations of Space Radar Lab 2 in the Fixed Base shuttle simulator in Building 5 at JSC. Here we are on the middeck during a long orbital simulation. The middeck of the fixed base was not high fidelity, but it had all the necessary pieces of the orbiter’s lower compartment required for normal and emergency procedures training. The galley worked, so we could sample space food during our longer exercises. 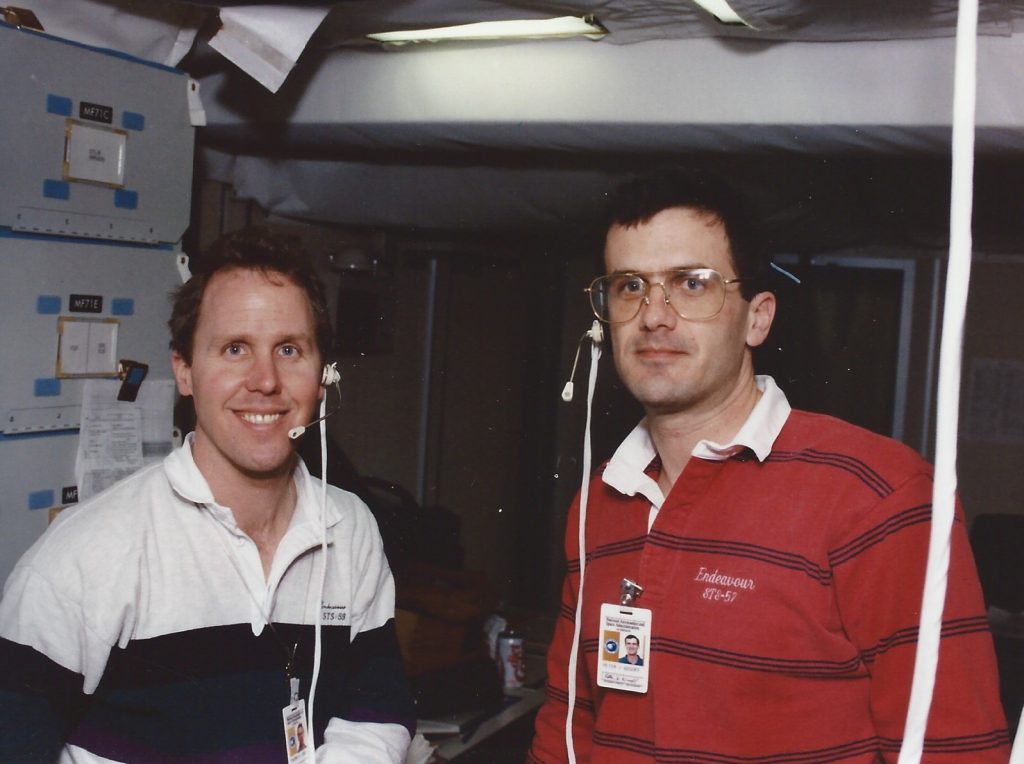 Tom and Jeff Wisoff on middeck of fixed base simulator. 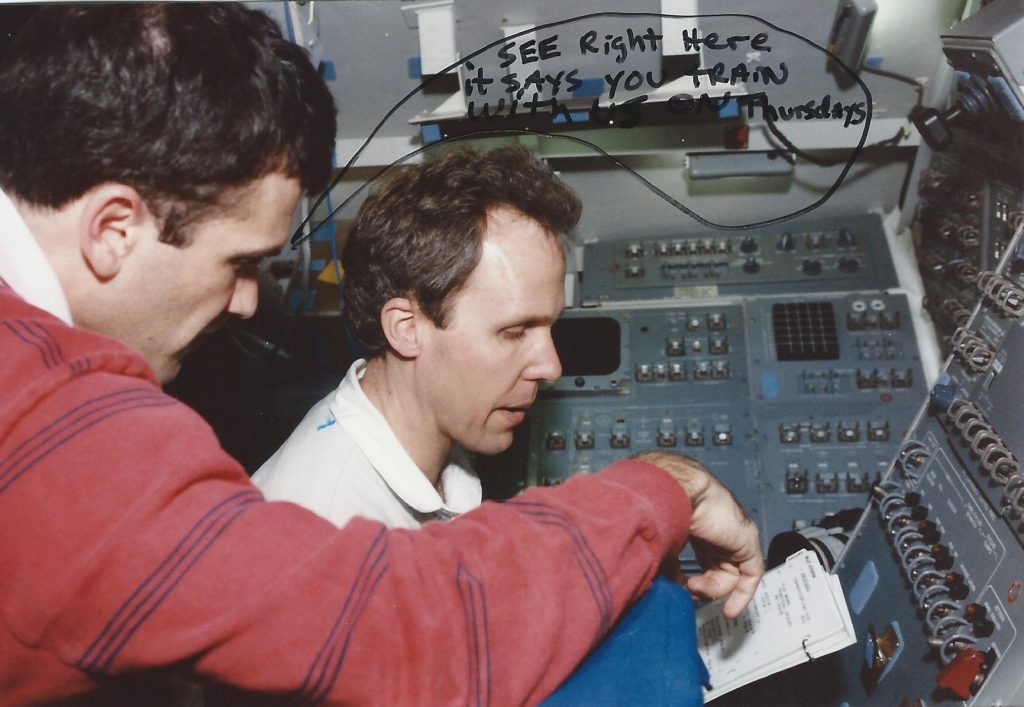 Jeff and Tom train for SRL-2 operations on the flight deck of the fixed base sim.

The cartoon dialogue in the photo above refers to the fact that I was training simultaneously for my STS-59 mission–my first–and STS-68 with Jeff and company–my second. Jeff and the rest of the crew never missed a chance to zing me on the fact that I was skipping many of their training sessions in favor of my imminent launch on STS-59, Space Radar Lab 1. If all went according to plan, I would fly on STS-68 just 4.5 months after launching on STS-59–a space shuttle record. But it was not to be…. 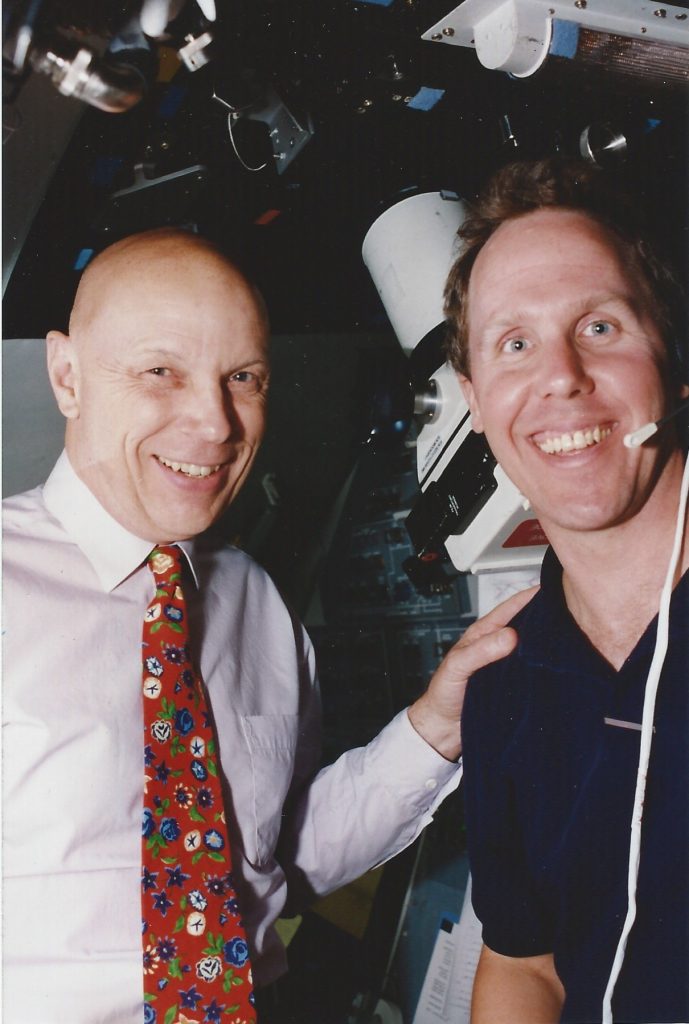 Story Musgrave dropped by the simulator to visit our crew and see first-hand what our operations setup was for Space Radar Lab 2. That’s the big barrel of the Linhof camera behind us, pointing at Earth overhead. Story was our lead capcom for the SRL-2 mission; I would later fly with Story on STS-80 in 1996. 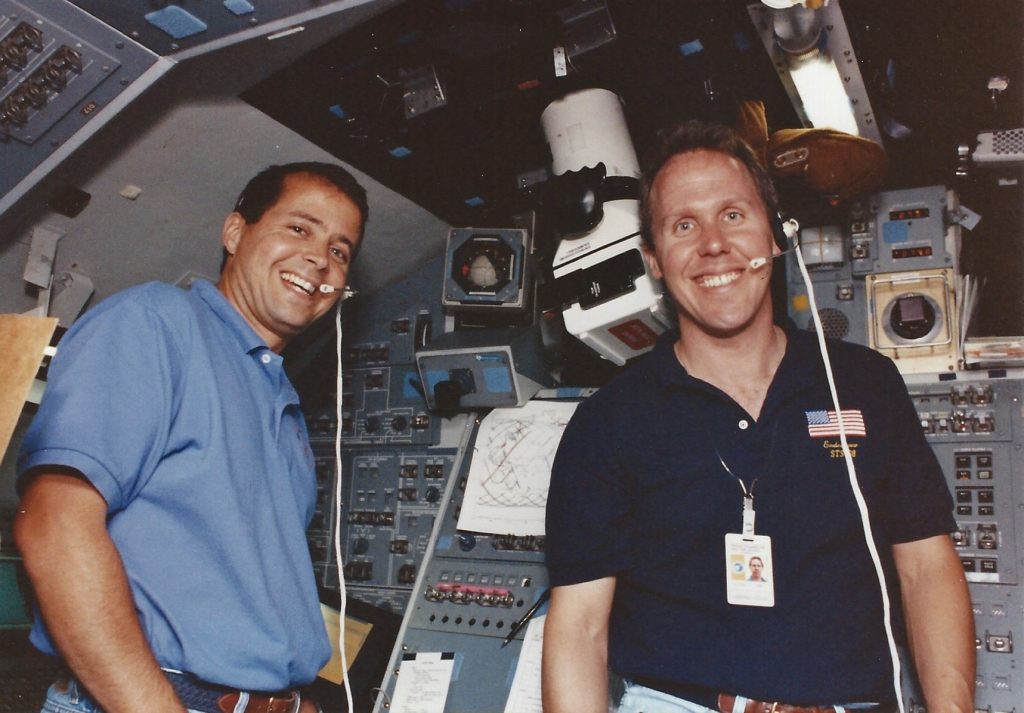 For SRL-2 training we used both the Fixed Base sim in Building 5 and the GNS simulator in Building 35. I can’t tell from these photos which one we’re in, but perhaps some of our sharp-eyed instructor team can tell the difference. In the shot above, you can see a map over my shoulder of our SRL data takes (radar on and off), and the big Linhof camera in the overhead window for our science photography. Dan would be our shift commander and orbiter systems ace (he served as MS-2, the flight engineer, during launch and landing). I was the payload commander, working with fellow scientist Jeff Wisoff on the Red Shift. The aft flight deck would be our office for the 11-day mission, running the SRL-2 payload. 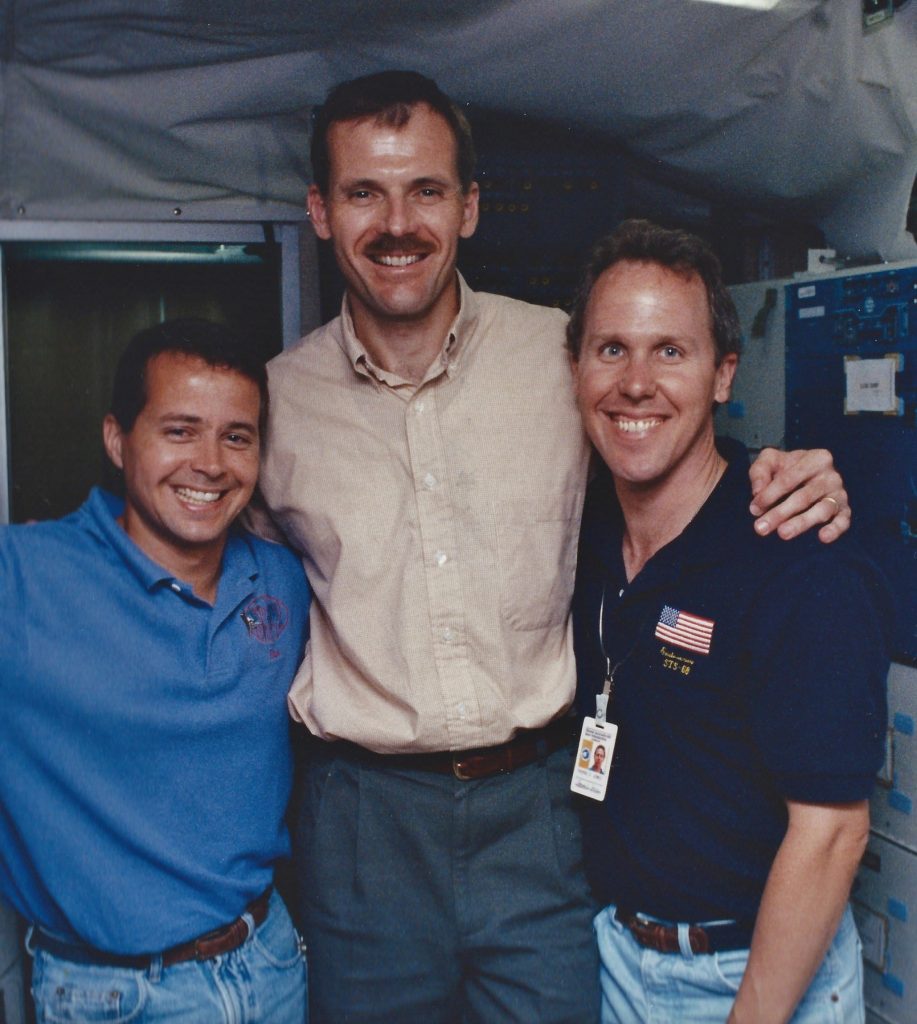 Dan, Steve, & Tom train on Blue Shift in the middeck of the Fixed Base simulator.

The Blue Shift–Dan, Steve, and I–train on the simulator middeck in the above photo, with the doorway out to “port” behind us; it led to the functional space toilet trainer across the hallway. It was useful to use that trainer during every simulator session, so the system operation was second nature by the time you got to orbit and experienced the call of nature. 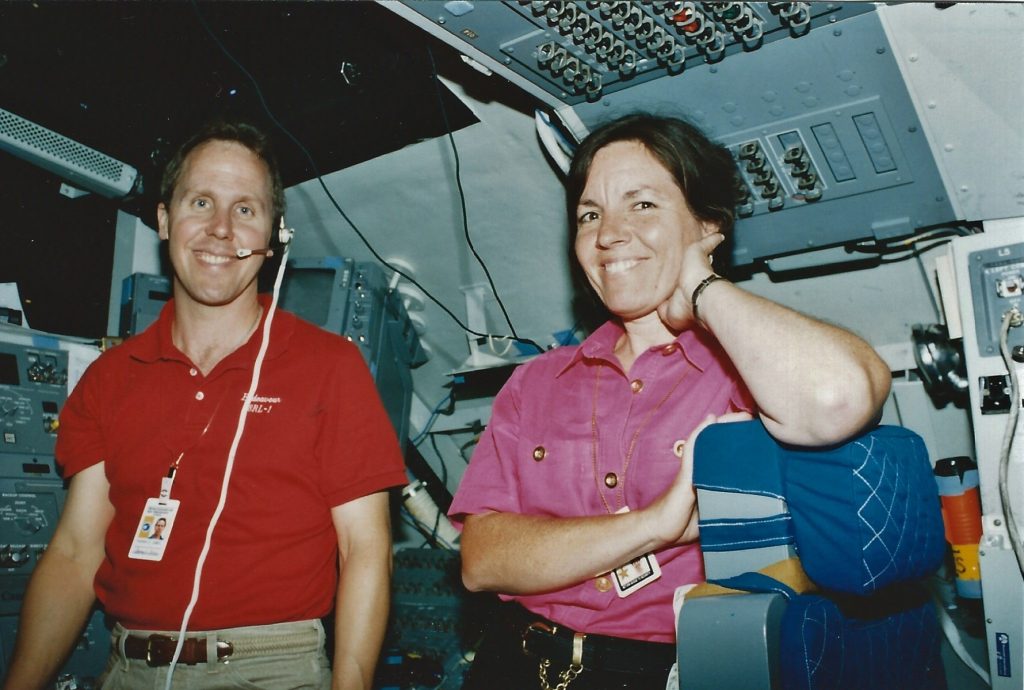 Tom and JPL’s JoBea Way during an SRL-2 sim in FB simulator.

JoBea Way (now Holt) was one of our Jet Propulsion Lab scientists for SRL-2, specializing in the boreal, or northern forests spread across the northern hemisphere’s high latitudes (think Alaska, Siberia and Canada). JoBea also served as one of our payload operations control center (POCC) communicators, taking an 8-hour shift each day in Houston while we were in orbit as the link between the flight crew and the science and experiment operations team. In the shot above on the aft flight deck, JoBea came over from Mission Control’s Building 30 to visit us in the sim and get a sense of our spacecraft routine during science operations. We astronauts did the same in reverse; when our shift was over, we’d pay a visit to the POCC to see how the team there handled operations.

Our crew of six included two EVA-qualified astronauts: Jeff Wisoff and Steve Smith. They trained for an unexpected spacewalk on STS-68, if needed for repairs or emergency closure of the payload bay doors or latches. As Jeff and Steve worked through their syllabus, including four underwater sessions covering most orbiter repair tasks, I visited to refresh my memory on their tools and to take some photos of them as they prepared to plunge into the 25-foot-deep pool. I’d trained for this same job on STS-59, a few months earlier. Here, Jeff is fully suited, on the donning stand, and ready to begin his training class. Steve Smith is on the other side of the stand. Crewmate and Endeavour pilot Terry Wilcutt took the photo. 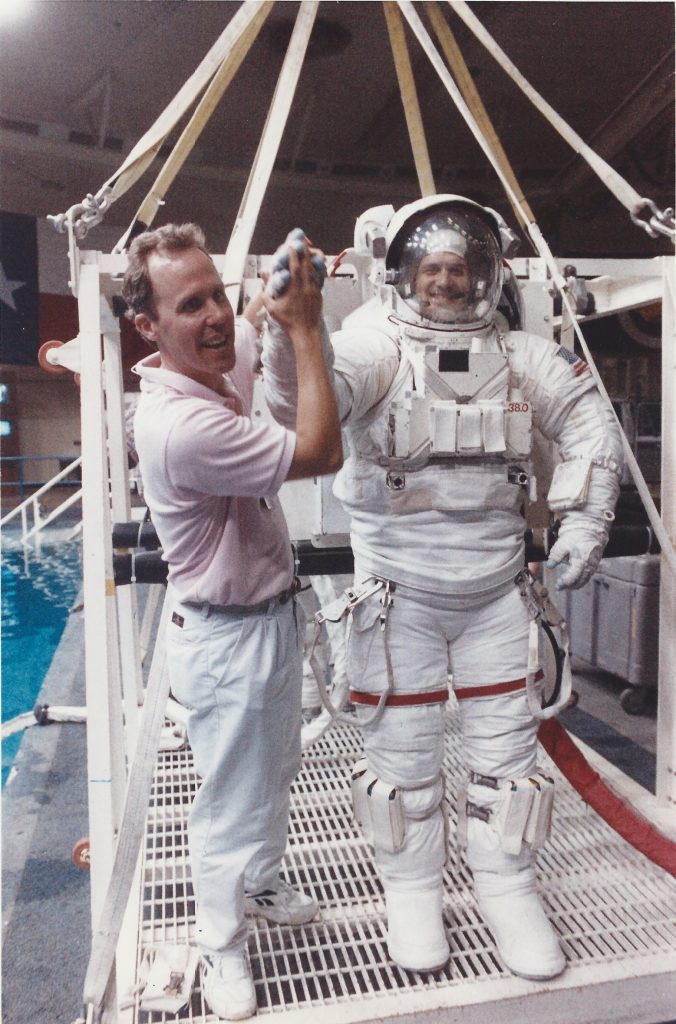 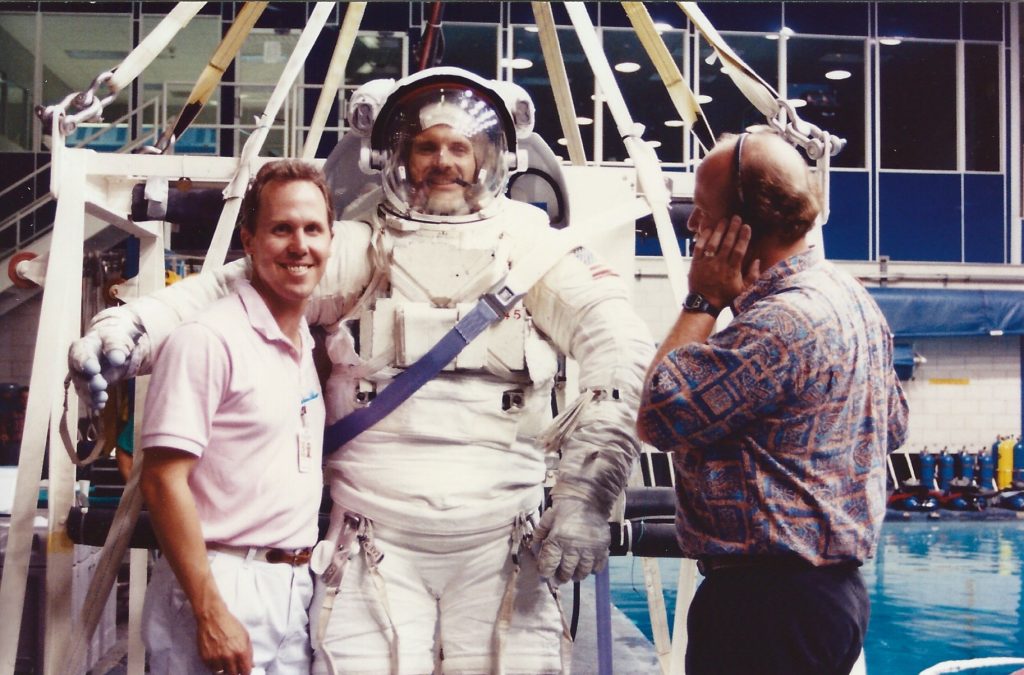 Steve Smith suits up for WETF run with Tom lending moral support. Terry Wilcutt was the Intravehicular Activity crewperson, helping the pair suit up, and then coordinating the EVA from inside the cabin.

Terry and I discussed Steve and Jeff’s work poolside at the Weightless Environment Training Facility in Bldg. 29 at Johnson Space Center. This building had once housed the Apollo-era centrifuge, but with the advent of the shuttle, the centrifuge gave way to the new WETF swimming pool for EVA training. The building also housed control consoles, life support systems, tool storage, a medical office, and diver and astronaut locker facilities. An ambulance was always parked at the WETF entrance during suited runs underwater.

Nearing our launch date in July and early August, we did a series of simulations, some lasting 36 hours, which helped get us ready with Mission Control for launch, orbit operations, and reentry. 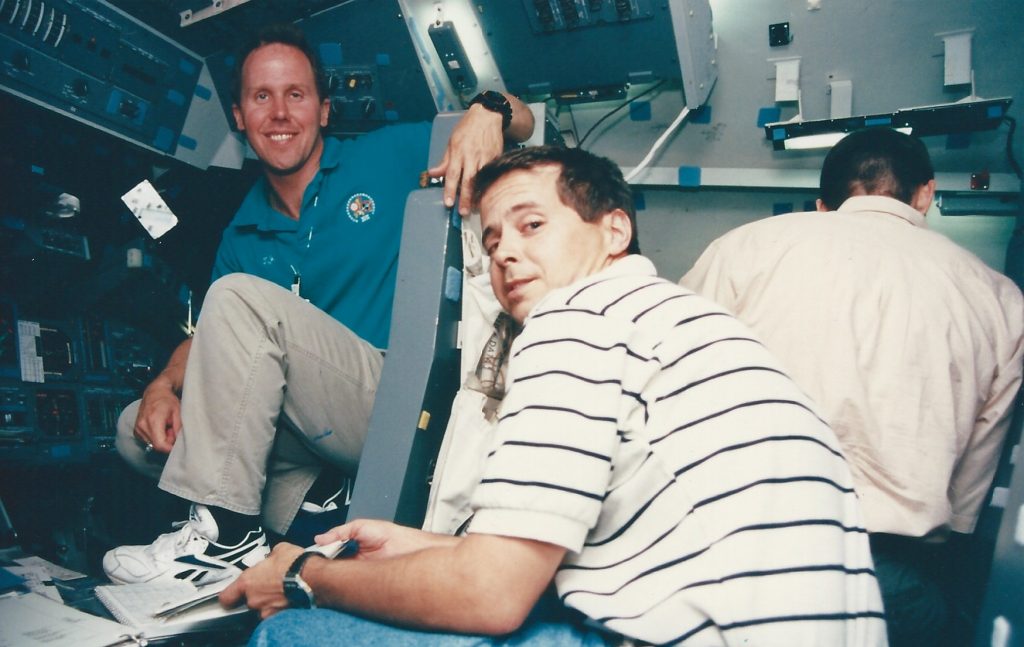 During one long sim, the Red Shift team of Bakes, Terry, and Jeff went off duty for some shut-eye, leaving our Blue Shift (the night shift in Houston) on duty for 12 hours. Here I’m with Dan and Steve on the flight deck. About every 45 minutes, we’d punch a new set of attitude coordinates into the flight computer to keep us aimed accurately at our upcoming targets and reduce the radar echo distortion due to the Earth’s rotation. Here Dan has the ATL, the attitude timeline, in hand to enter the next set of coordinates. Steve is busy with videotaping our science targets, and I’m hovering over Dan’s inputs — we always double-checked them lest we miss or botch a maneuver (more than 400 during the mission, a shuttle record). 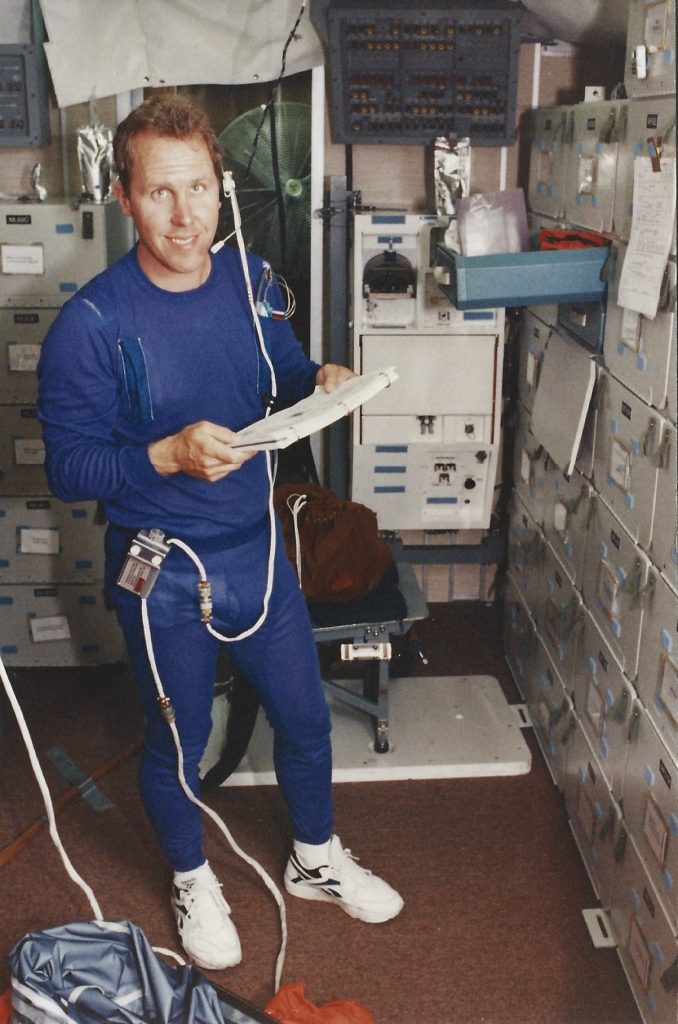 Tom preparing for reentry in a deorbit prep sim on middeck of the fixed base simulator.

What’s going on above is that our crew is readying for reentry in a simulation running through “deorbit preparation,” or Deorbit Prep. I’d be on the middeck for reentry with Steve Smith. You can see one of our suits on the floor, ready for donning. Steve’s seat is behind me next to the galley, with a mesh bag containing his helmet, gloves, and kneeboard. The lockers at right are the forward storage lockers, containing our food. clothing, checklists, camera gear and film, and several science experiments. I’m wearing my Patagonia long-johns while I wait to suit up, meanwhile running through the checklist that prepares the middeck for reentry. On my left shoulder is the electrical lead for the EKG sensors I’ve got glued to my chest, to monitor my cardiac response during reentry. We’re not weightless, and the simulator middeck is a bit roomier than the real shuttle’s, and not all of the lockers and switch panels are in the right place, but we can practice all our steps here, including suiting up, strapping in, and reentry and landing. This training was very effective: in the real spaceship, I knew where every piece of gear was and where to find every switch and circuit breaker.

Check out the shuttle drink bag just to the left of my head; it would ordinarily be velcroed to the wall.

Steve, I think, took the shot below, with me pondering my next switch throw on the overhead communications panel on the middeck. I’m holding the Deorbit Prep checklist–my bible for this phase of flight. 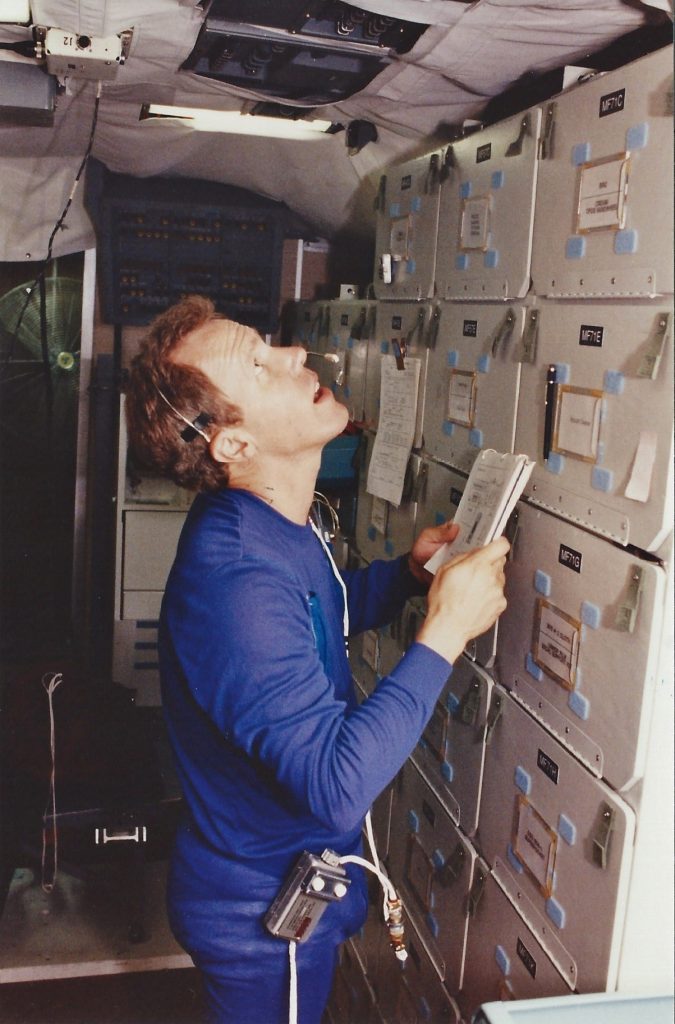 Tom checks switch settings on middeck of Fixed Base sim.

Nearing our deorbit burn, all six of us were suited for the entry phase of the simulation. Here I am in the Fixed Base middeck with my Launch and Entry Suit (LES) on. 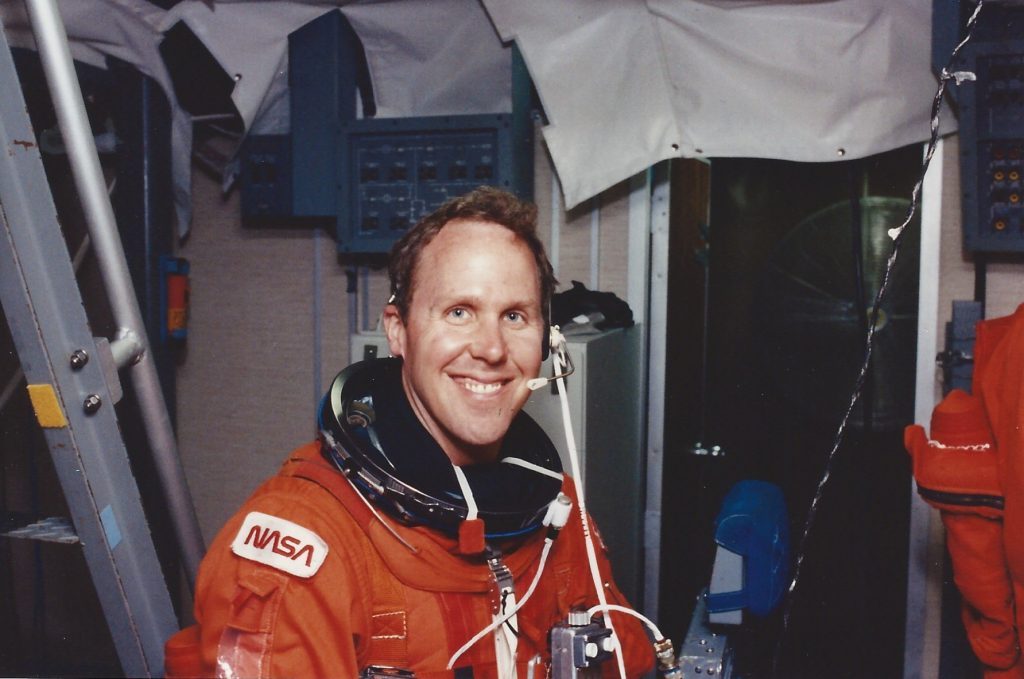 Tom ready for deorbit sim portion of the sim, seated in the MS-4 seat in the middeck.

Read more about STS-68 in Sky Walking: An Astronaut’s Memoir, by Tom Jones.