During March 22-24, 1994, our STS-59 crew arrived at Kennedy Space Center for our Terminal Countdown Demonstration Test (TCDT). We were just over two weeks from launch on STS-59, Space Radar Lab 1, aboard shuttle Endeavour. This being my first flight, arriving for a dress rehearsal of our launch countdown was a galvanizing milestone for me. Our ship was nearly ready, as were we. TCDT was the last major milestone we faced in our flight training for the mission. Here are some photos from our 3-day experience. 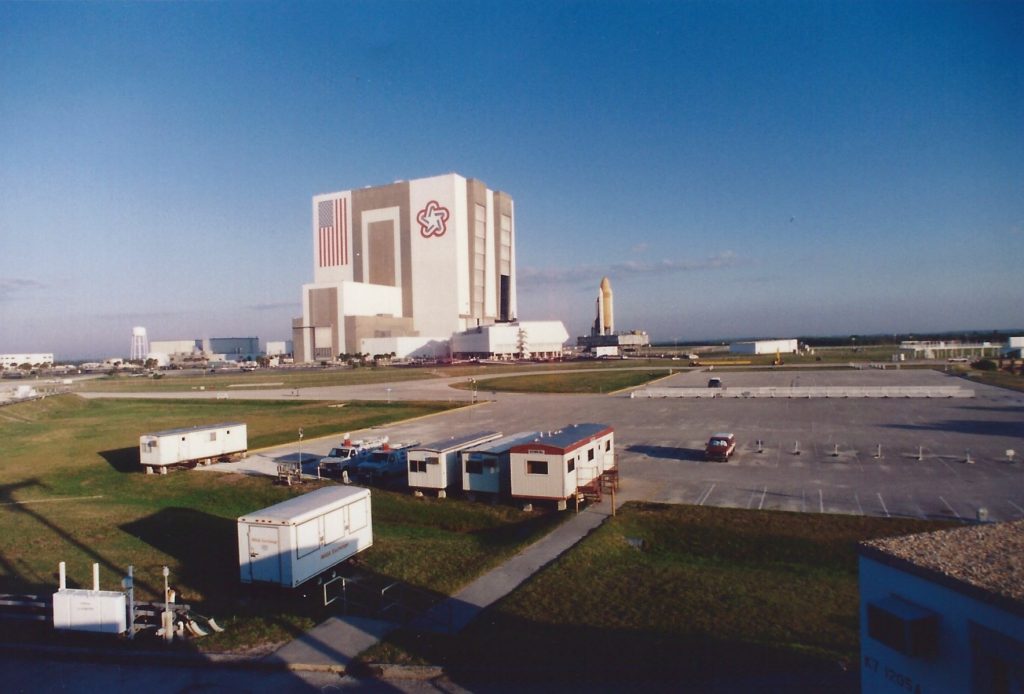 From the press site, Kennedy Space Center personnel watched shuttle Endeavour roll out of the Vehicle Assembly Building and head for launch complex 39A. Endeavour would fly mission STS-59 in April 1994. 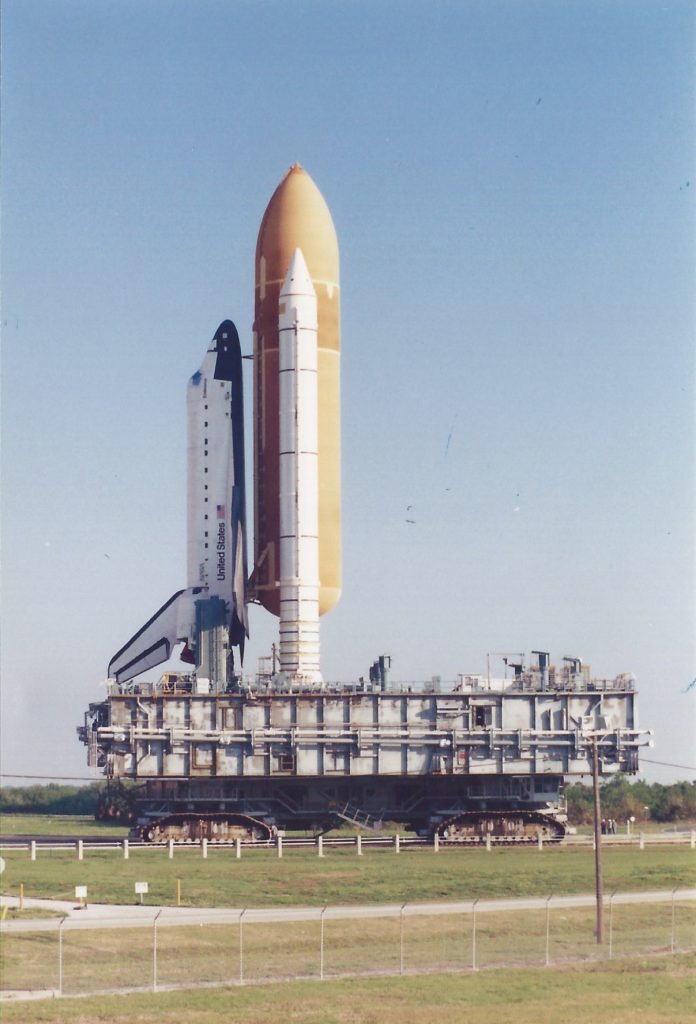 Endeavour on MLP during rollout for STS-59 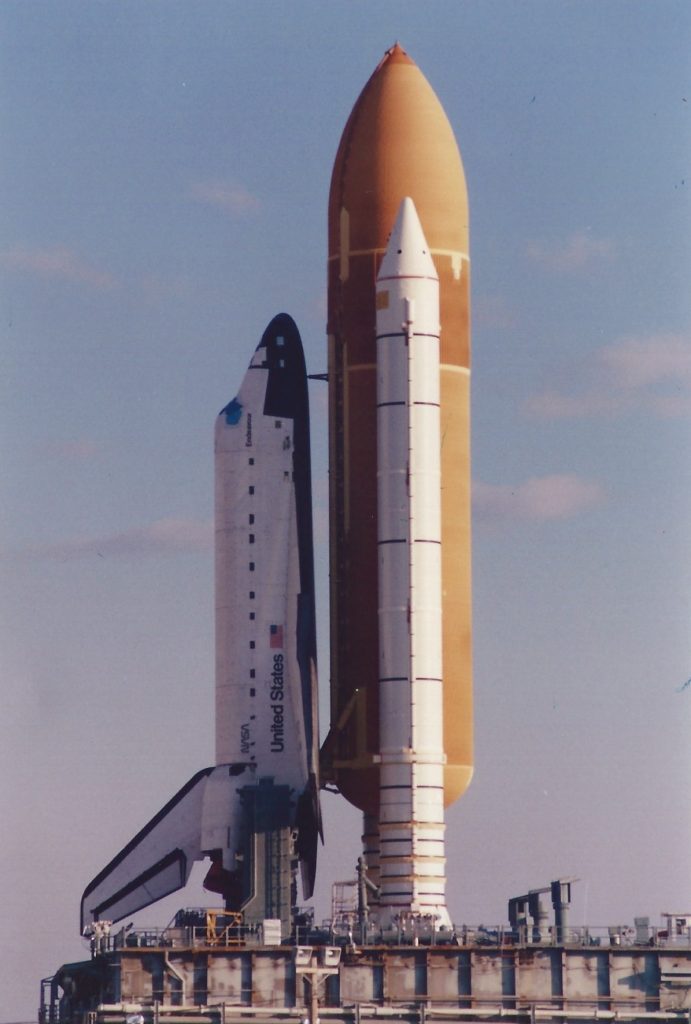 Endeavour, its external tank, and boosters ride the Mobile Launch Platform toward launch pad 39A. 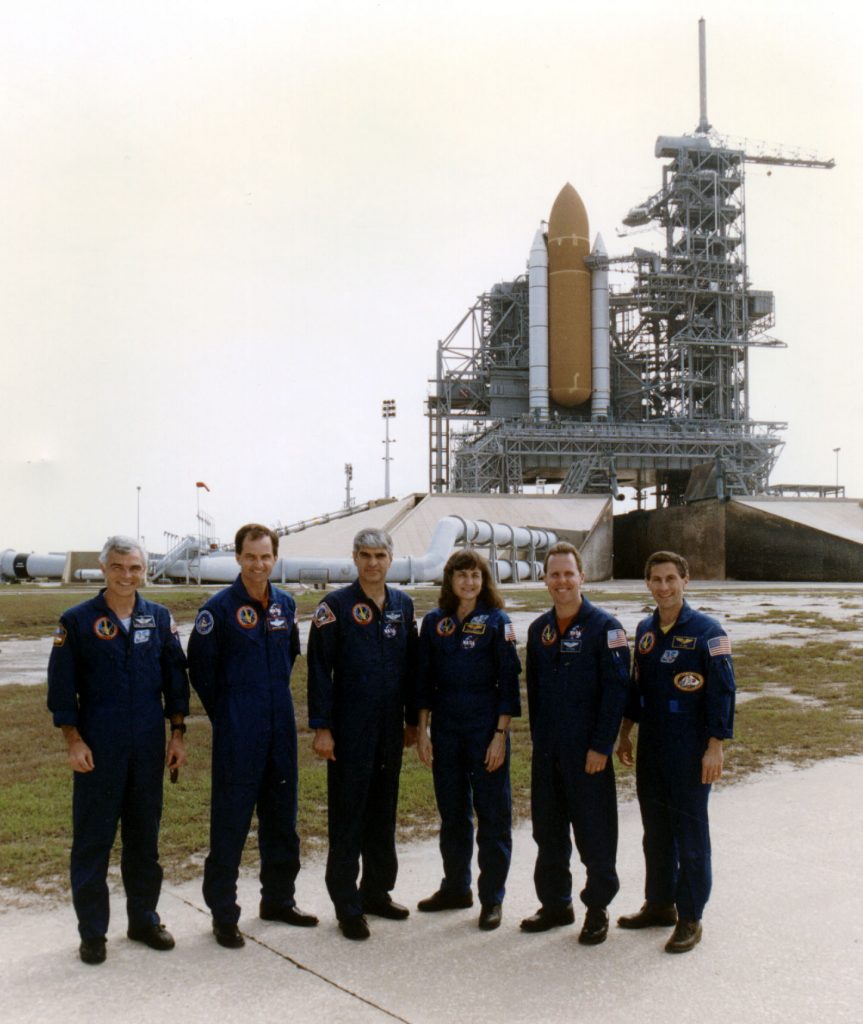 The most thrilling activity we undertook during our safety briefings and exercises was the chance to drive NASA’s M-113 armored personnel carrier. Should we have to escape from the launch pad and shelter in the blast bunker, we might have to evacuate an injured crewmember, using the M-113, to a helipad clear of the danger zone. Yeah, it’s fun to drive a “tank”. (Soon after, NASA painted its APC’s a highly visible yellow-green.) 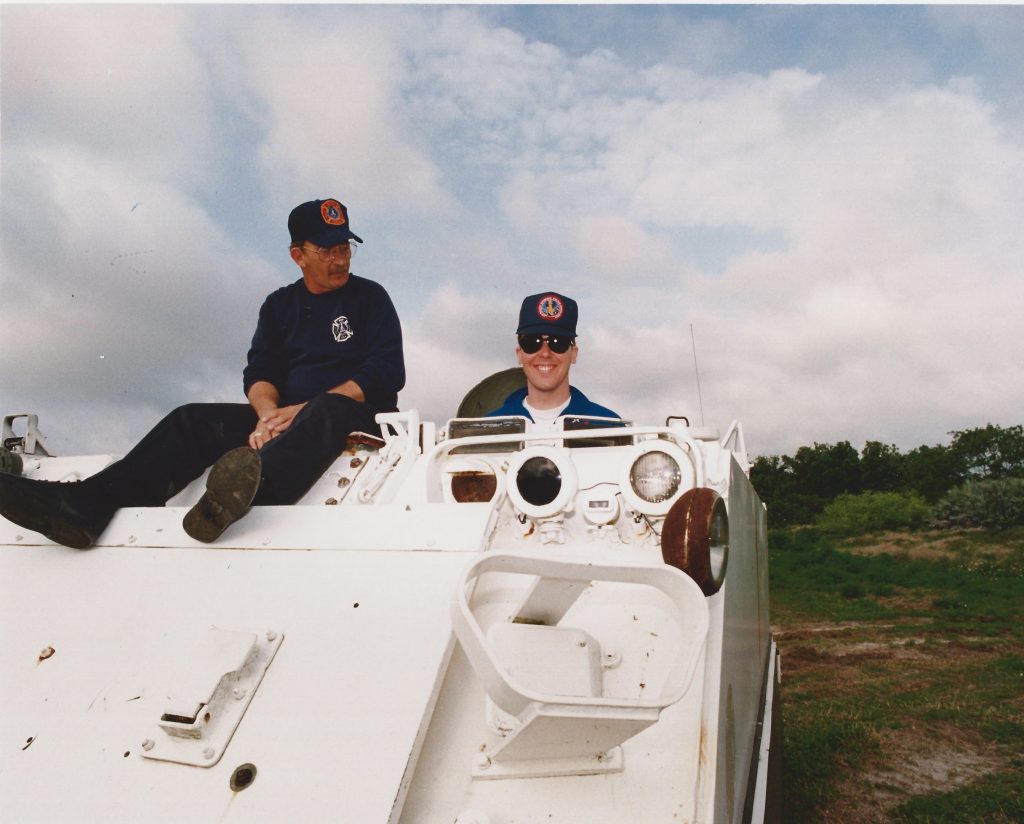 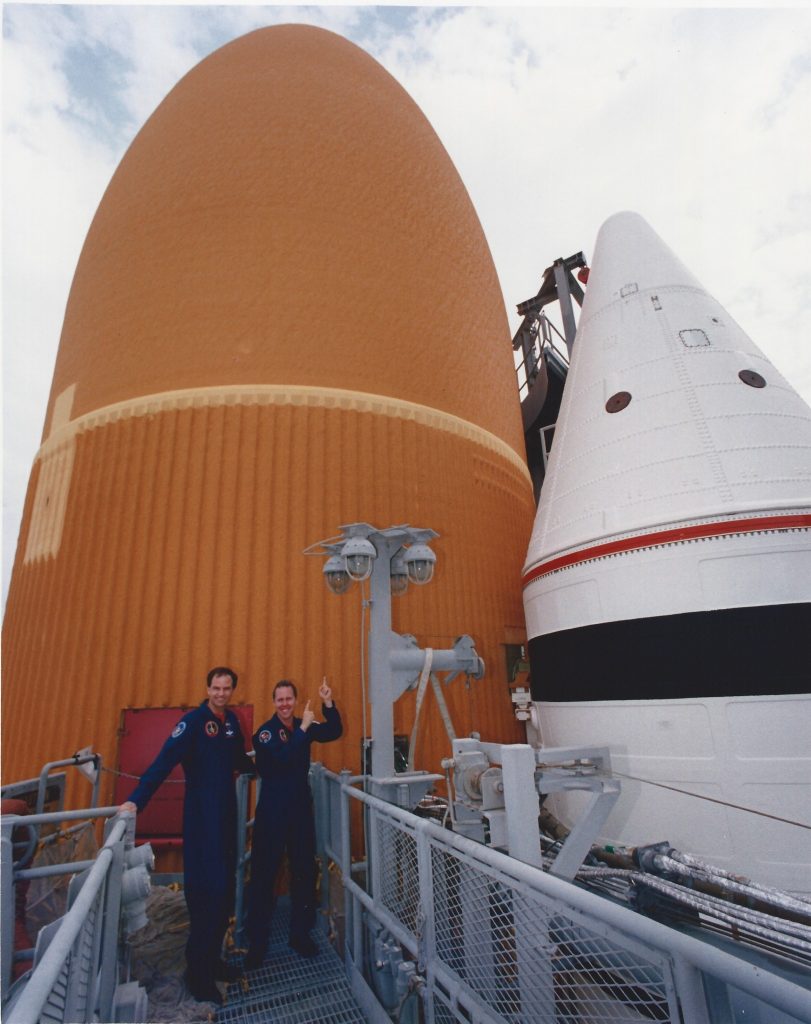 Kevin Chilton and Tom Jones on the access arm for Endeavour’s external tank. Tom displays his hopes for a few weeks hence. 3-23-94 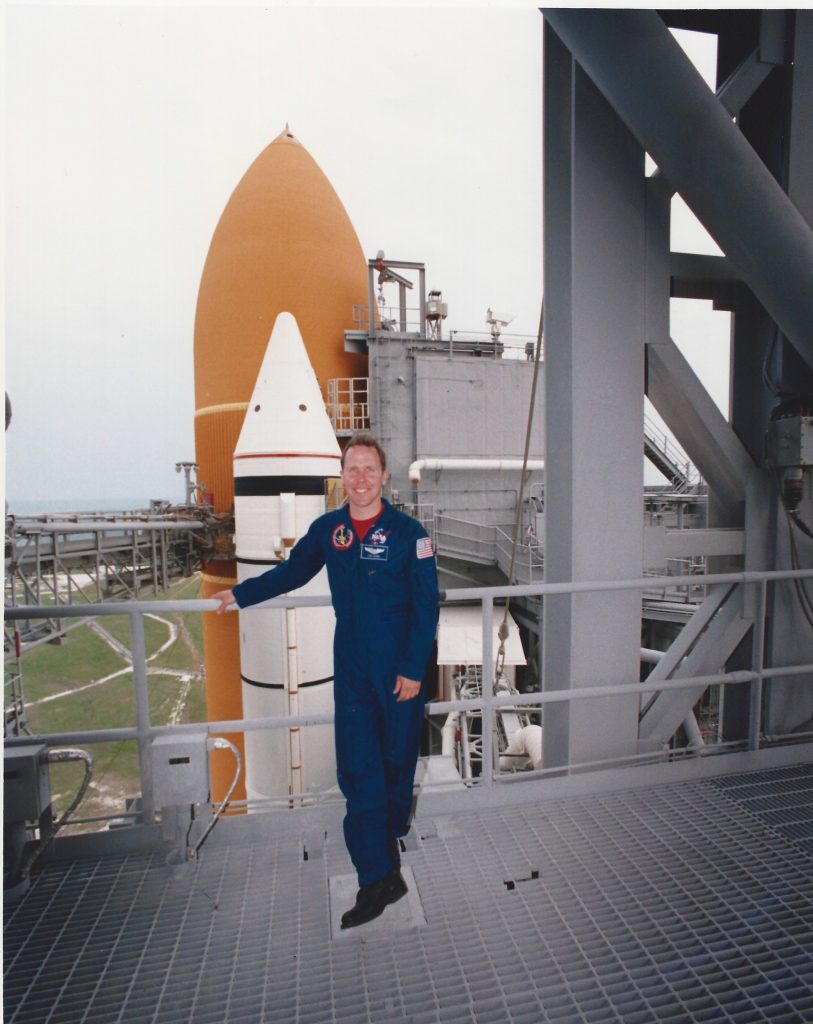 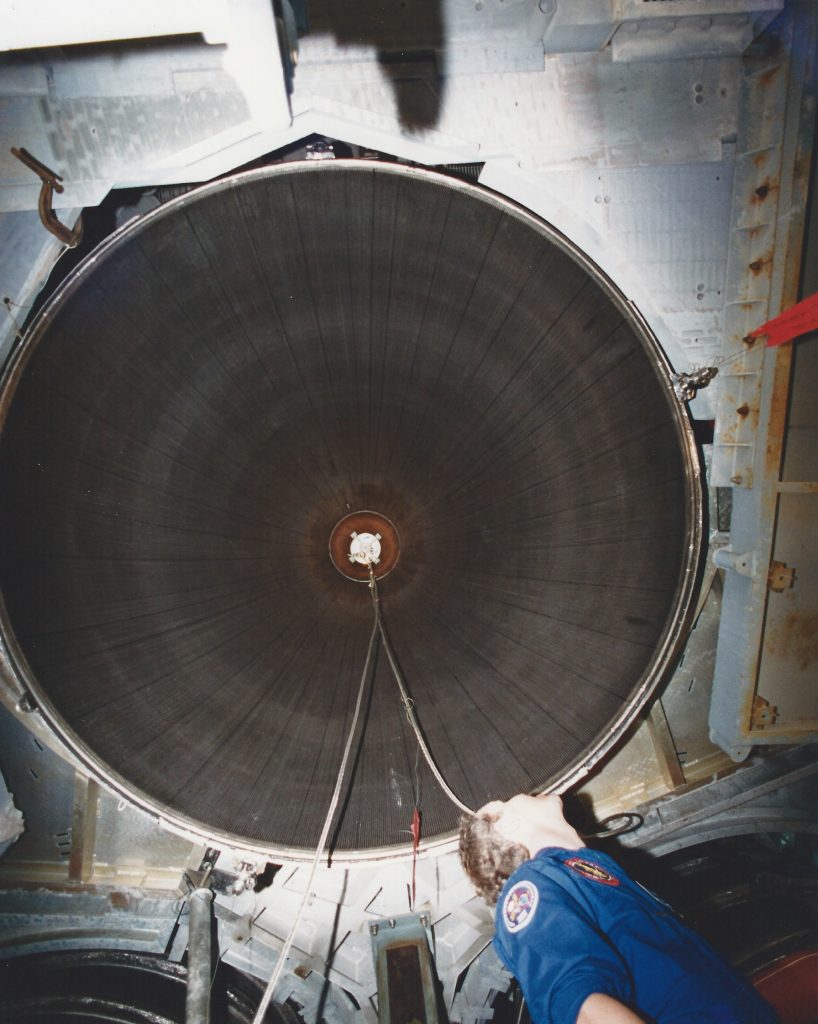 Tom Jones stands beneath the exhaust nozzle of one of Endeavour’s three Space Shuttle Main Engines. Burning oxygen and hydrogen, each one puts out about 1 million pounds of rocket thrust at liftoff. 3-23-94 (NASA)

The shot below gives you some idea of the scale of a space shuttle ready for launch. The external tank and orbiter will be accelerated by those boosters and the main engines (above) will be accelerated to 25,000 feet per second in just 8.5 minutes, pinning an astronaut to his or her seat under a 3-g load. Looking at that stack, it’s almost incomprehensible to imagine yourself as a physical participant of such a process. 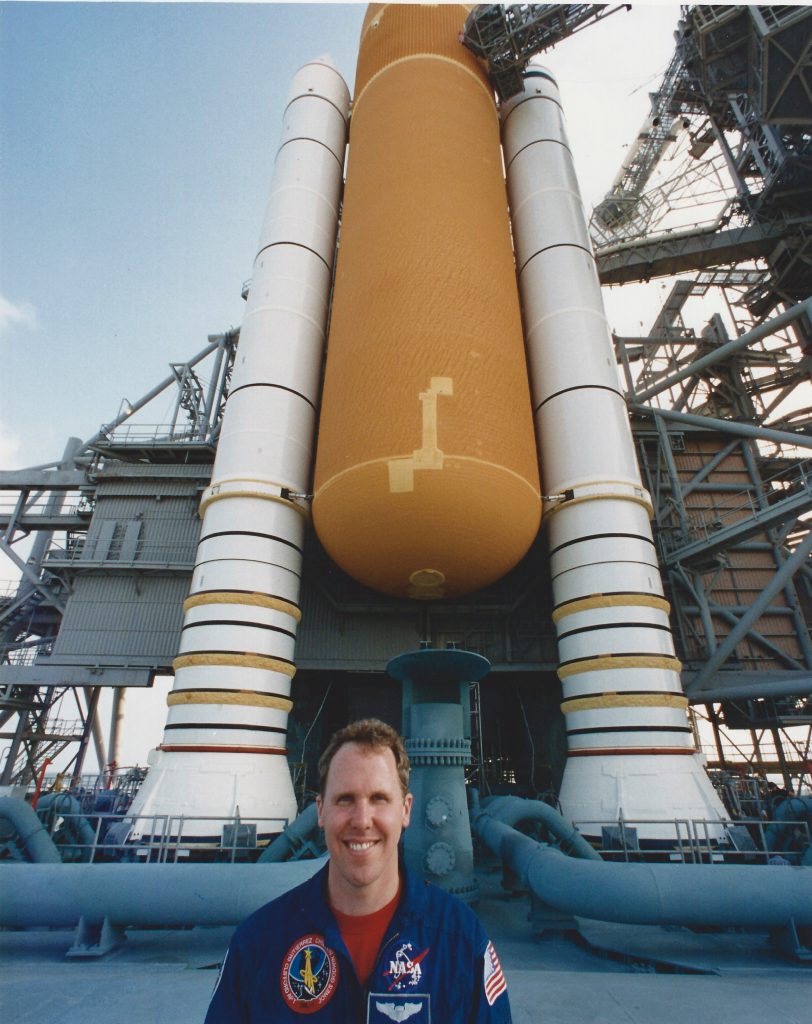 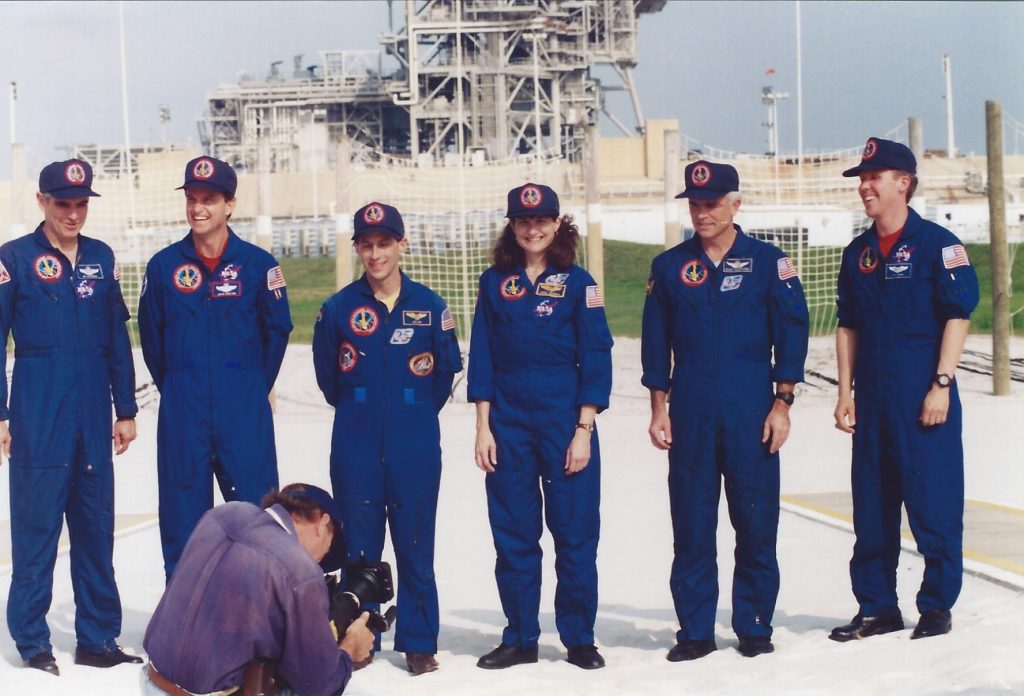 The crew fields questions during the STS-59 TCDT press conference.

We flew to the Cape in our T-38 Talon training jets, landing at the shuttle landing facility (SLF) near the VAB. Endeavour had rolled out some weeks before, as shown in these photos. On March 23, we conducted some fire fighting exercises and safety classes, enjoyed crew quarters meals, and toured the launch pad and the crew escape systems, like the slide-wire baskets, we would practice with the following day. Our concluding event that day was a press conference held near the blast bunker and slide-wire basket landing area near the perimeter of Pad 39A. 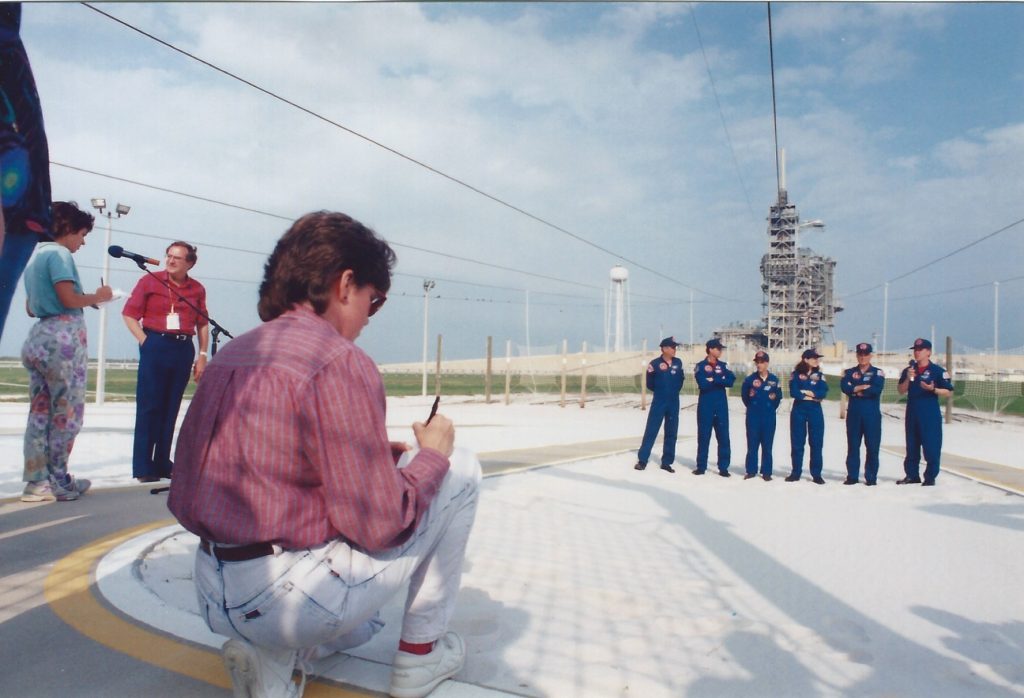 The STS-59 crew (Gutierrez, Chilton, Apt, Godwin, Clifford, and Jones conduct their TCDT press conference at Pad 39A (rear). We were standing in the sand pit where our escape slide baskets would deposit us enroute to the blast-proof bunker behind the photographer. I think that’s reporter Beth Dickey in foreground. (NASA) 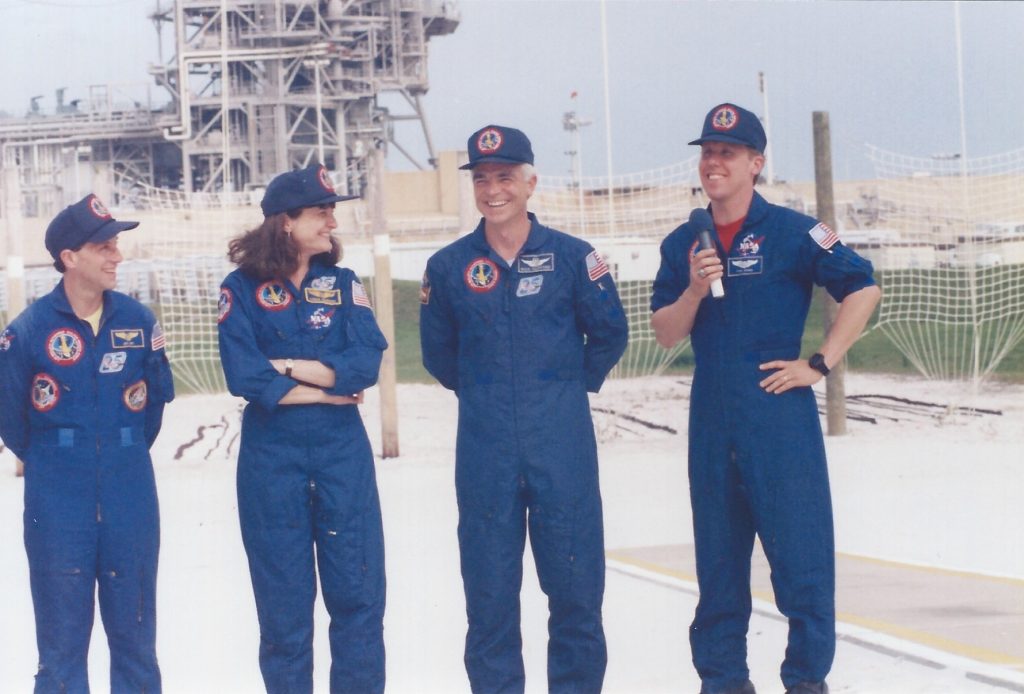 Jay Apt, Linda Godwin, Rich Clifford, and Tom Jones take questions from the press during our STS-59 TCDT, March 23, 1994. Shuttle Endeavour is behind the pad structure at rear. 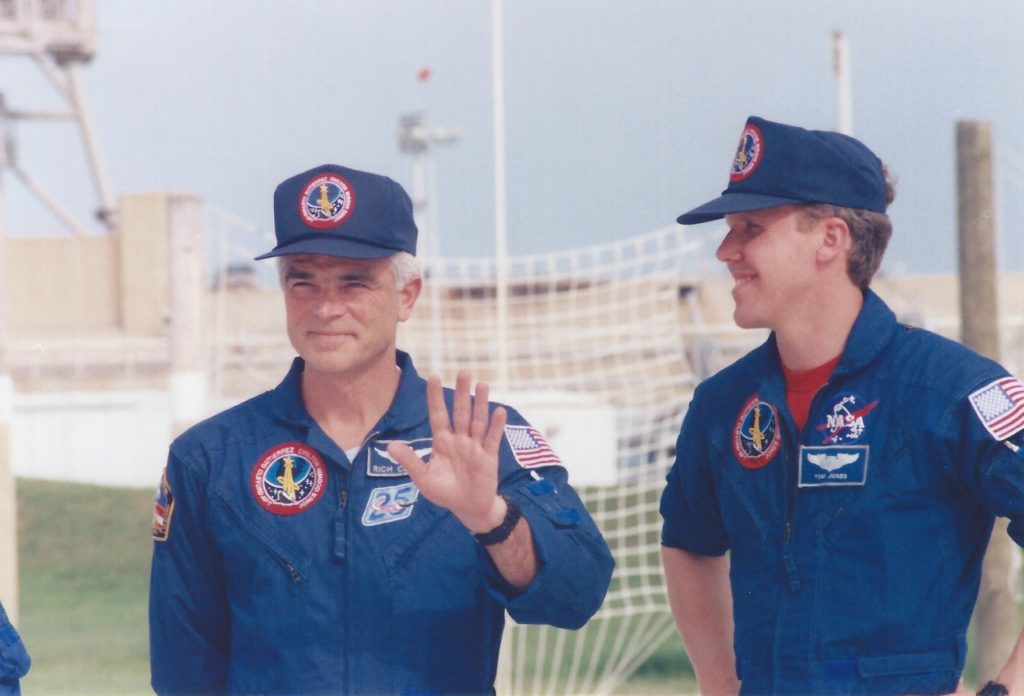 Rich Clifford speaks to the press during the STS-59 TCDT press conference. 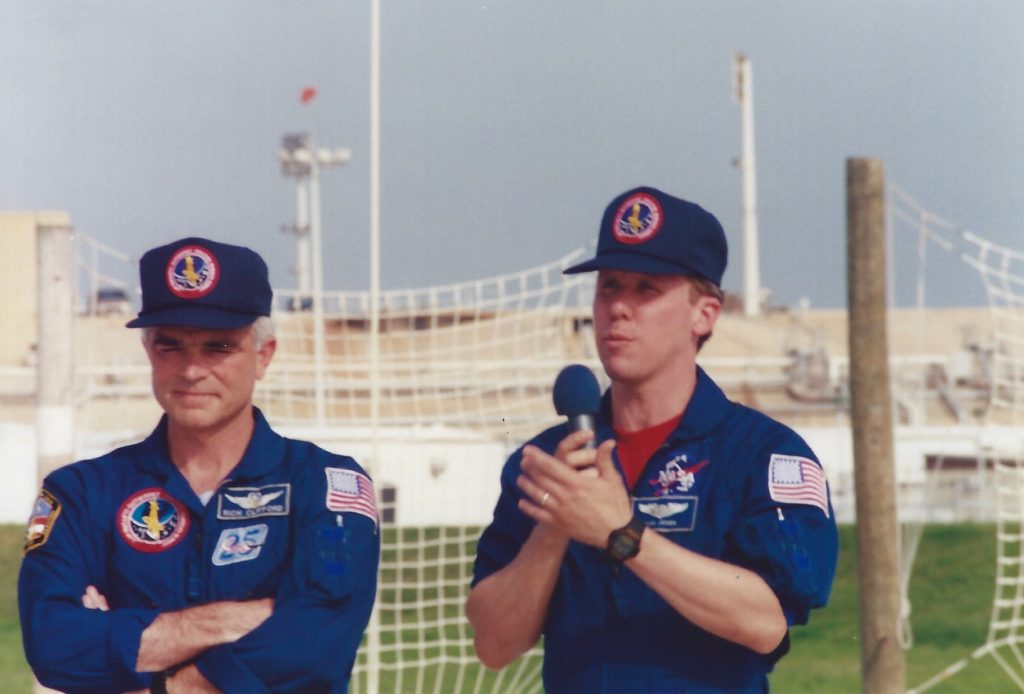 Rich and Tom answering questions. The government loaned me that Casio G-Shock watch on my left wrist; I returned it after the mission. On later flights, I brought my own along. 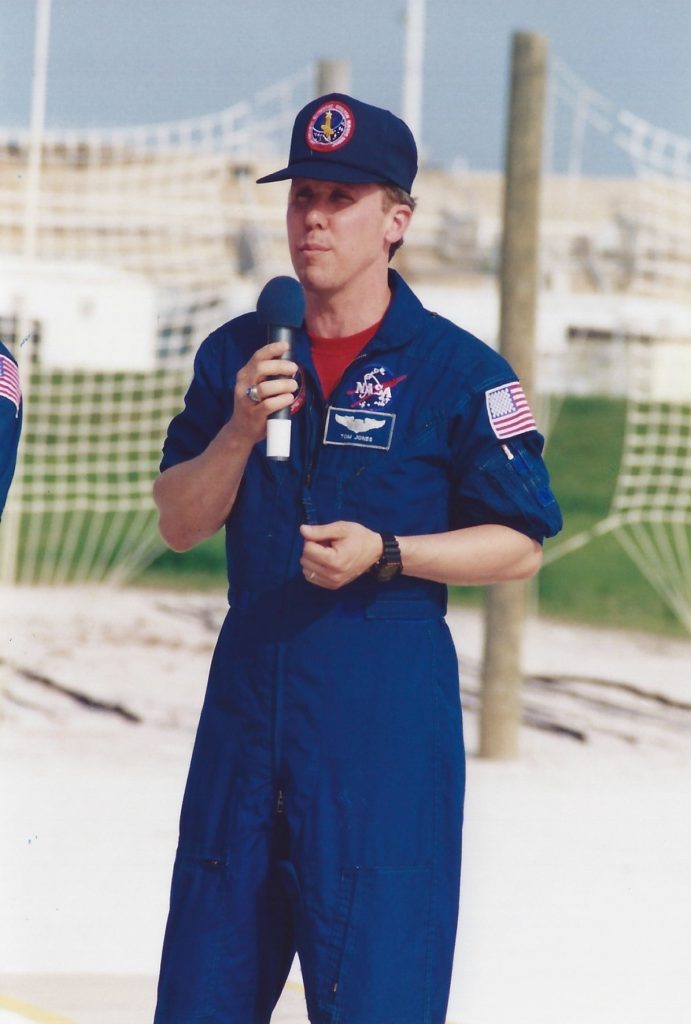 Tom speaks to reporters about Space Radar Lab at the TCDT press conference.

We finished our press conference work and returned to crew quarters, all of us headed for an early bedtime the night before the terminal count demo test with our launch controllers. We enjoyed some final suit checks before turning in. 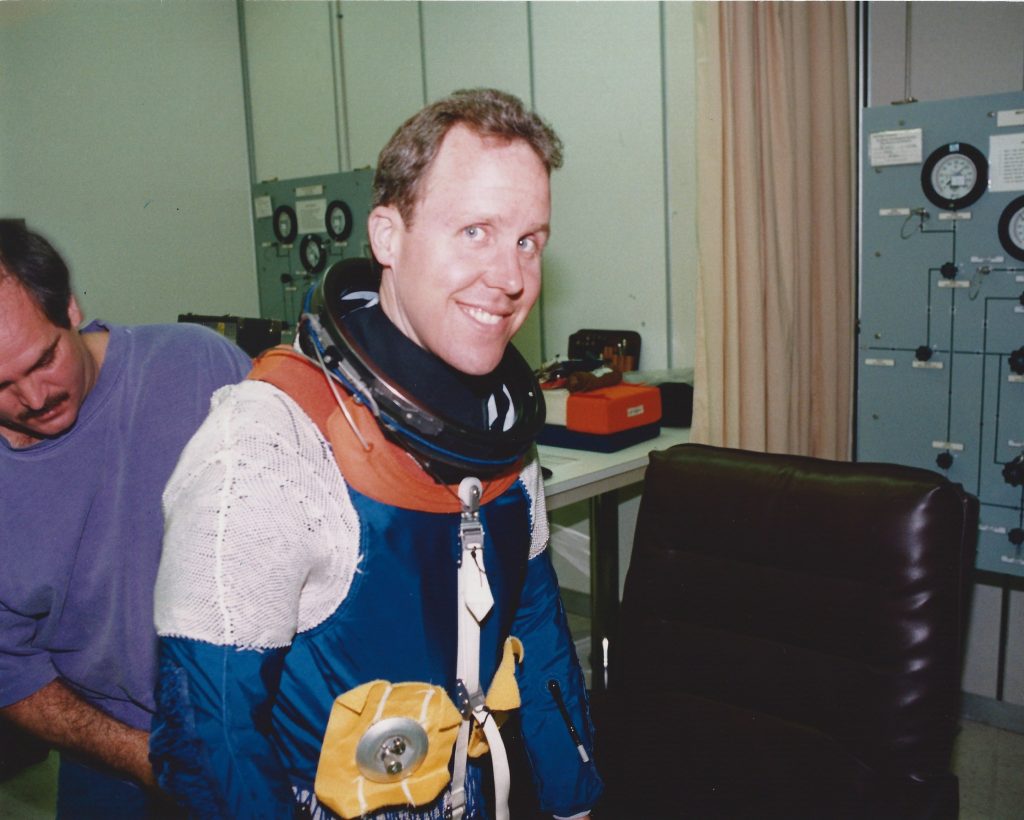 During our stay at crew quarters, Tom tested the pressure garment that underlay my Launch and Entry Suit. I would wear the ensemble during our STS-59 TCDT countdown test the next day.

Aiming at a T-minus-Zero at around 10 am that day, we rode to the launch pad early in the morning on March 24. Crawling into the orbiter for the first time in the vertical position was an eerie, yet thrilling experience. Our crew climbed into our seats with the help of our technicians, and our Astronaut Support Person, for this mission, our fellow astronaut Andy Thomas. After the countdown reached zero, launch controllers declared a pad abort and ordered a crew egress exercise, practice for a rapid escape from Endeavour to the slide-wire baskets across the gantry. 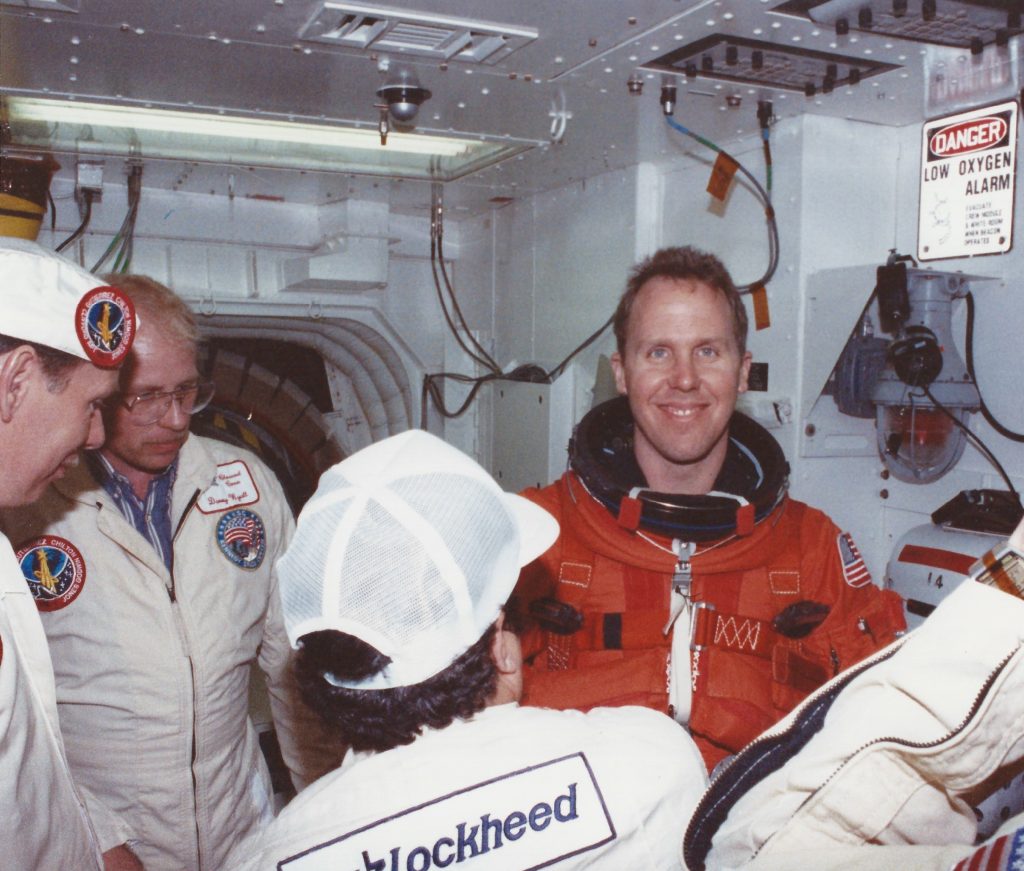 Tom dons his parachute harness and survival gear in the White Room during TCDT. Endeavour’s side hatch is at rear. Thanks to our suit technicians who made sure we put every piece of gear on correctly. (NASA) 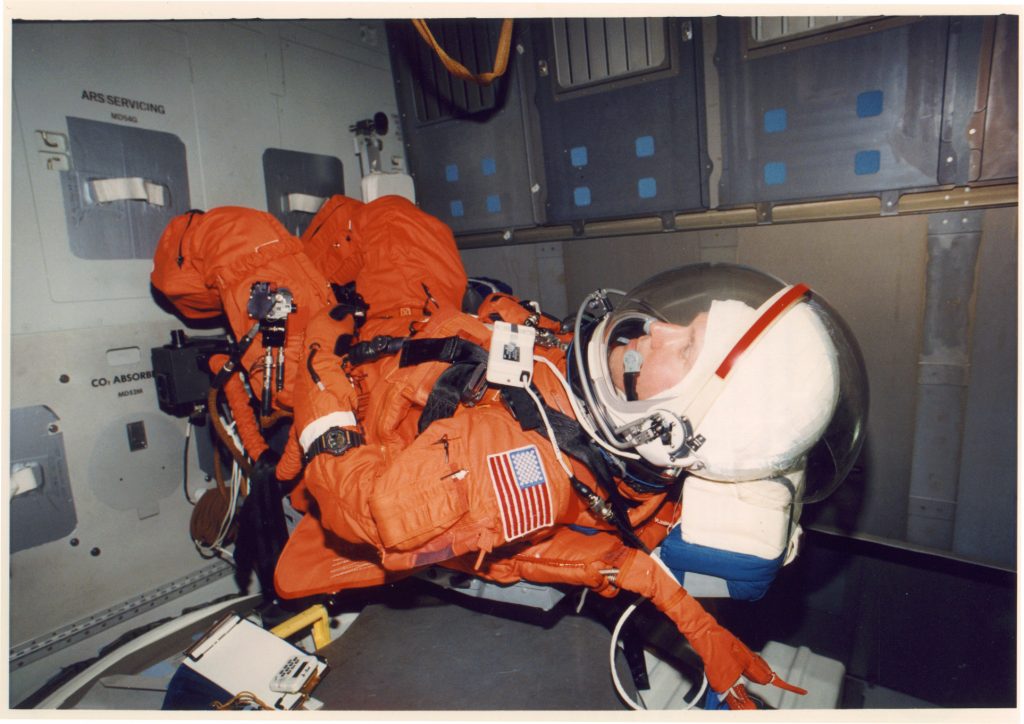 In the photo above I’m nearly finished strapping in with the help of our suit techs and ASP Andy Thomas. My parachute is still not attached to the harness (see left chute strap dangling at lower right), and my oxygen line on my left thigh is still not mated. My helmet is the practice version; just a clear visor. On launch day it will have the full dark visor as well as the clear one. Sleep bunks are to my right. My kneeboard and Radio Shack timer sits on the airlock hatch cover just off my left elbow. Activated at liftoff, the timer tells me our ascent milestones, such as staging, 3-g throttling, and time to MECO.

We concluded our dress rehearsal with a simulated countdown to T-minus-Zero, when Launch Control declared a pad abort and an emergency egress from the shuttle cabin (a Mode 1 egress). Linda Godwin swung open Endeavour’s hatch, and I followed her out into the White Room and across the swing arm and gantry to these escape baskets. Unfortunately, when I smacked the release paddle just out of view to the left, we didn’t go anywhere: the basket was chained firmly to the service structure of the pad. No zipline ride for us! 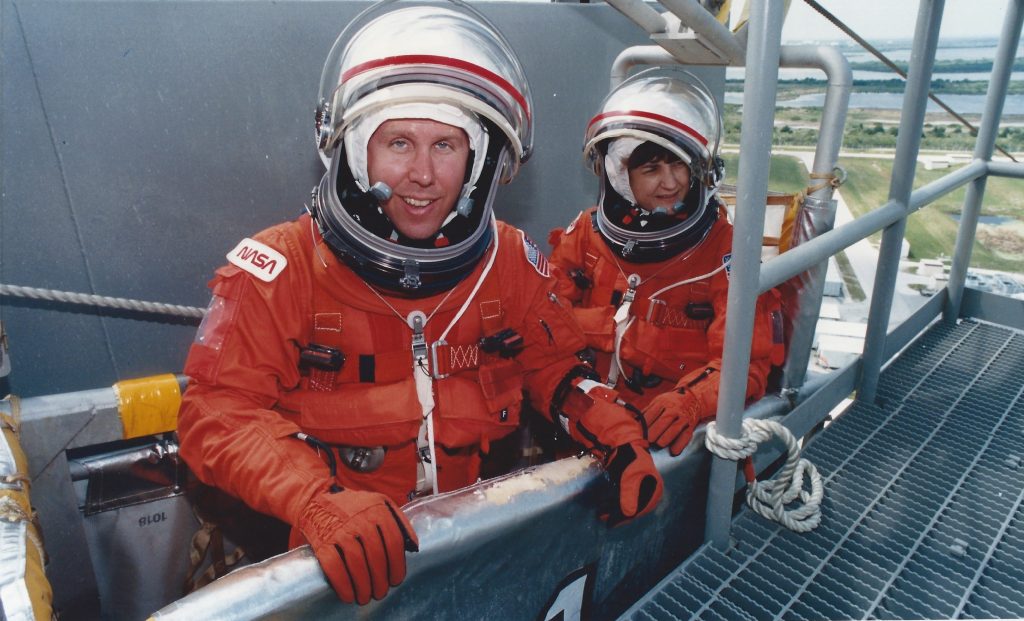