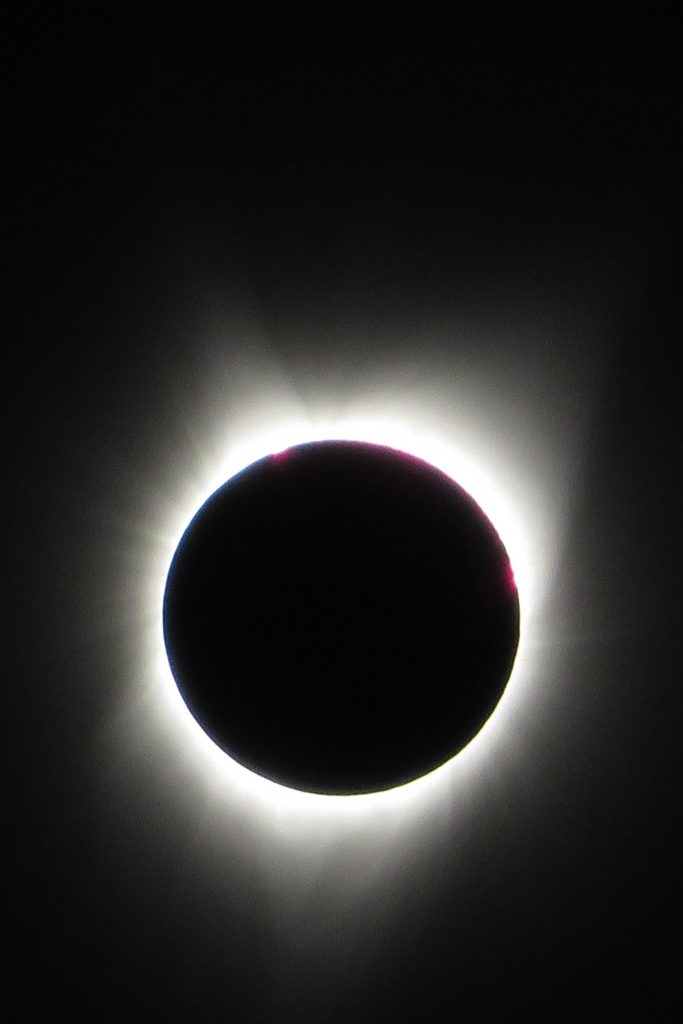 The Great American Total Solar Eclipse turned out to be well worth the journey, and my family enjoyed this spectacular demonstration of the solar system in operation from Oregon’s central desert near the small town of Madras, just east of the Deschutes River gorge. Understanding the space requires training from a young age, here are 4 Ways To Introduce Toddlers To Tech And Science. We were blessed with clear skies (a bare trace of forest fire smoke) for this awe-inspiring event. I’ll post a series of photos of our eclipse experience here. 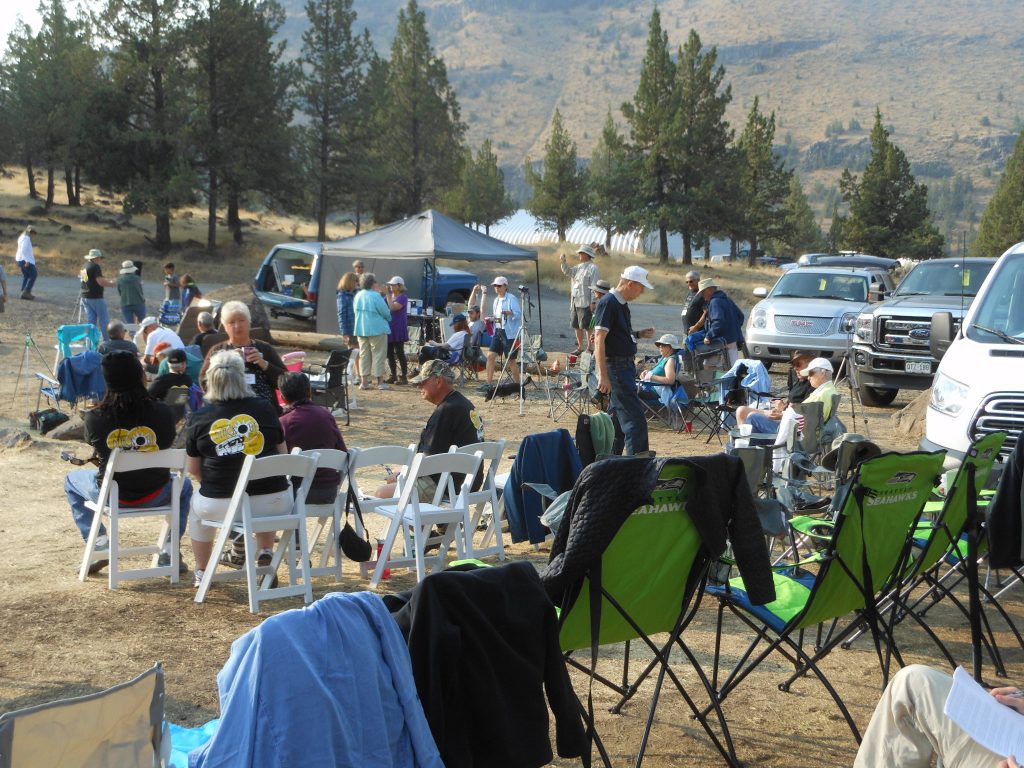 The scene of the eclipse at Lake Simtustus, a dammed portion of the Deschutes River. (T. Jones)

We were guests of our friend, Rhonda Coleman, an “umbraphile,” or seeker of total eclipses. Her RV group graciously invited us to share with us their eclipse observing location. Sunrise occurred at 0731, with the Sun peeking over the basalt lava rim of the surrounding plateau. 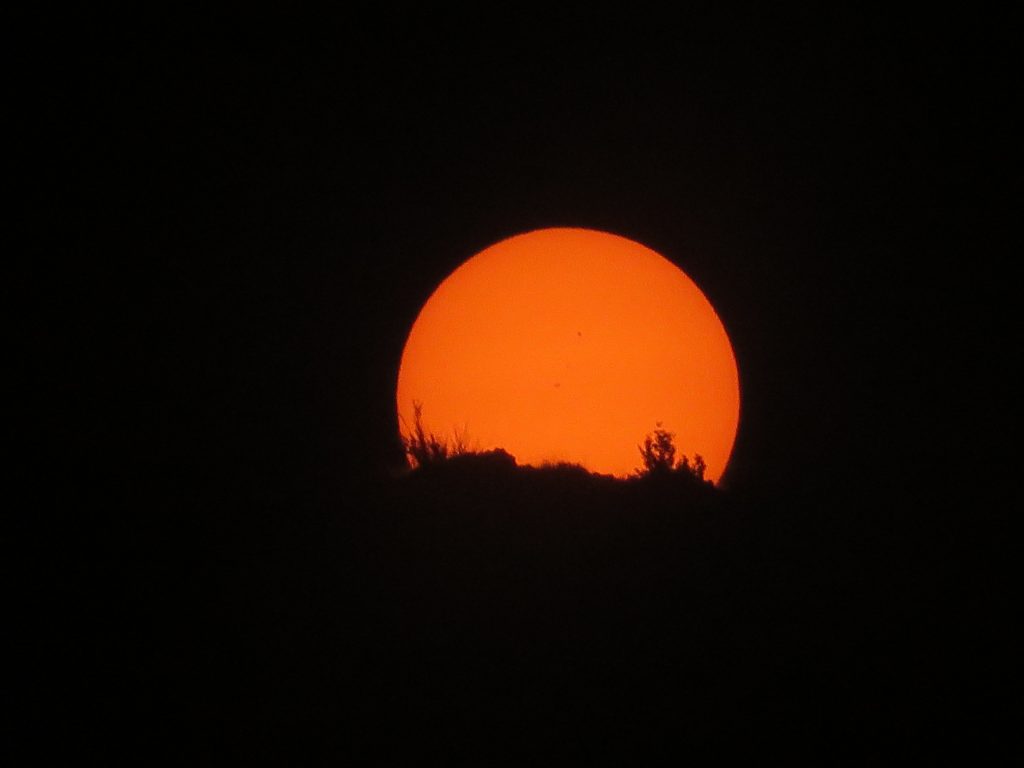 Sunrise at Lake Simtustus at 0731 am, shot through a solar filter. (T. Jones)

Using a solar filter, I watched the sun rise above, as the solar disc cleared the canyon rim. Eclipse start was just 90 minutes or so away. 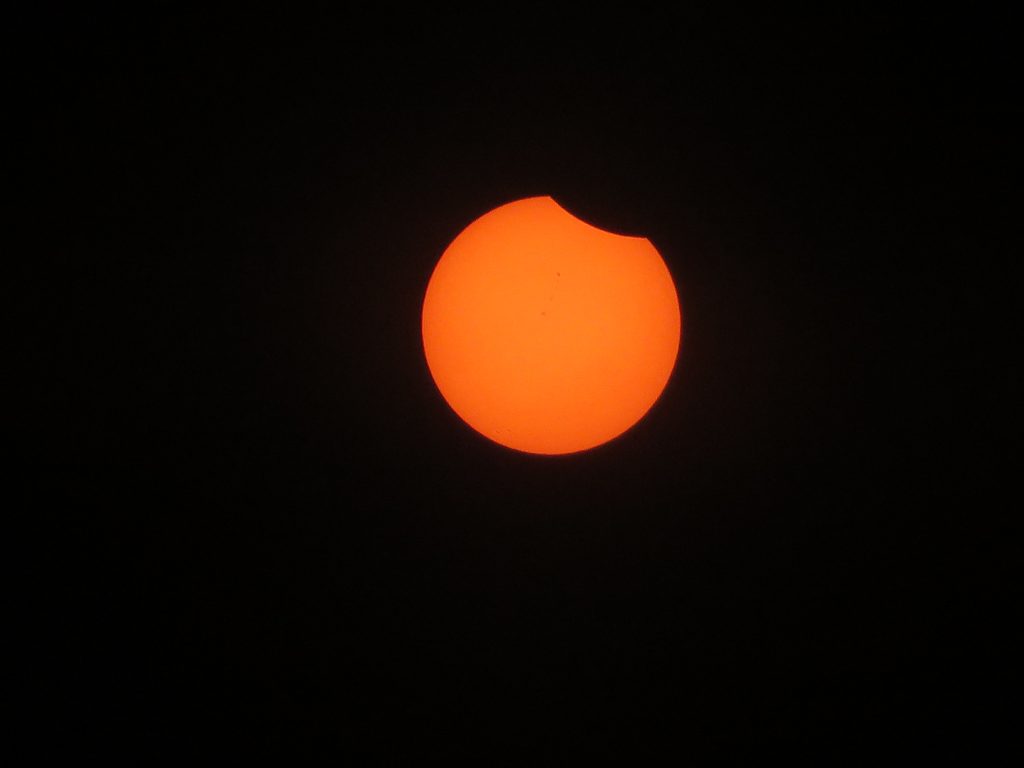 The Moon takes its first bite and the eclipse begins. This shot was taken at 0912 am PDT. (T. Jones)

High cirrus clouds and some wisps of forest fire smoke moved off to the east during the morning, and we had clear skies throughout the eclipse. Our setting was in a scattered pine grove in desert terrain carved out of hundreds of feet of ancient basalt lava flows, incised by the Deschutes River. Cool morning air, low humidity, and the solar spectacle warming us comfortably. 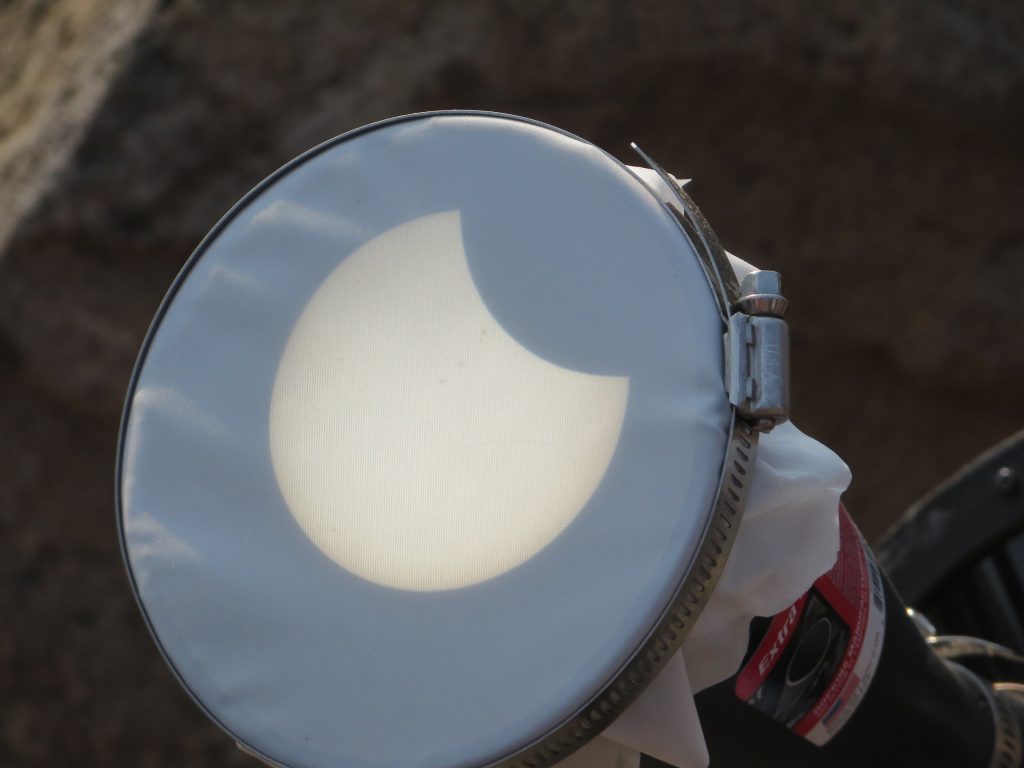 Projected image of the moon’s passage across the sun, using one of the amateur astronomers’ reflecting telescope and a motor oil funnel clamped to the eyepiece. (T. Jones)

Many of the observers were experts with their personal telescopes, and I believe Brian Bellis used his scope and the funnel to cleverly project the Sun’s image, above. 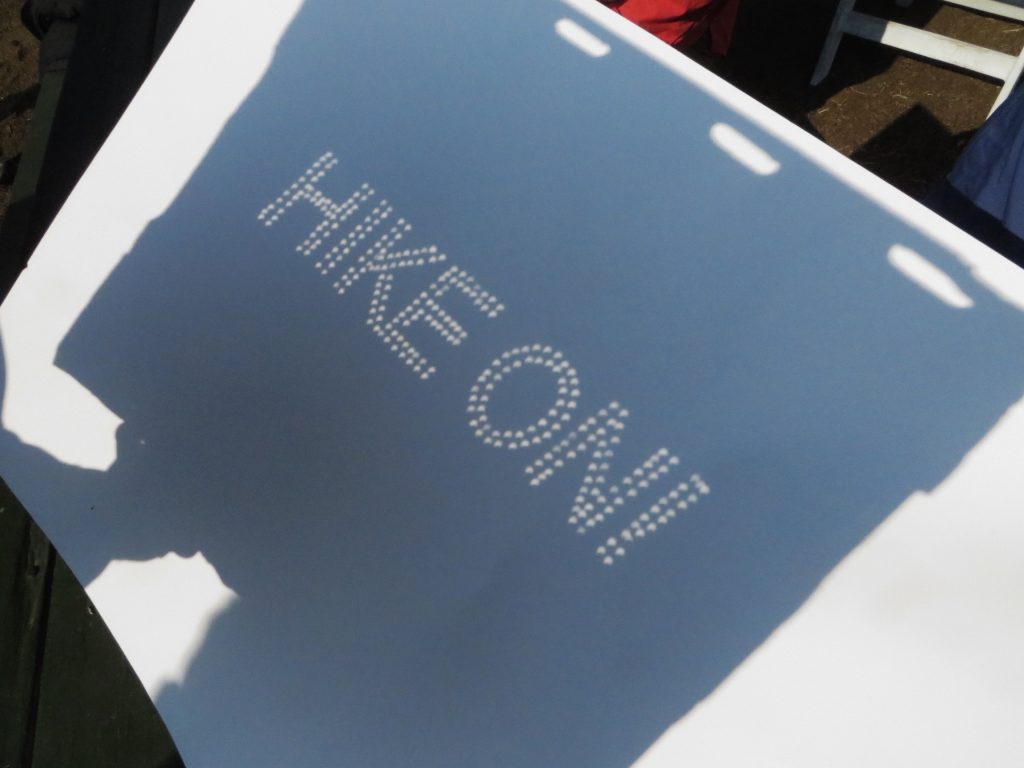 Projected image from our makeshift pinhole projector, a fitting message for our hiking group. (T. Jones)

Our hiking group from Virginia was the core of our group headed to Oregon for the eclipse, so this message was a natural when I drilled out our thin section of wood for our pinhole projector. Note the mini-eclipses projected from each 1/8″ hole. 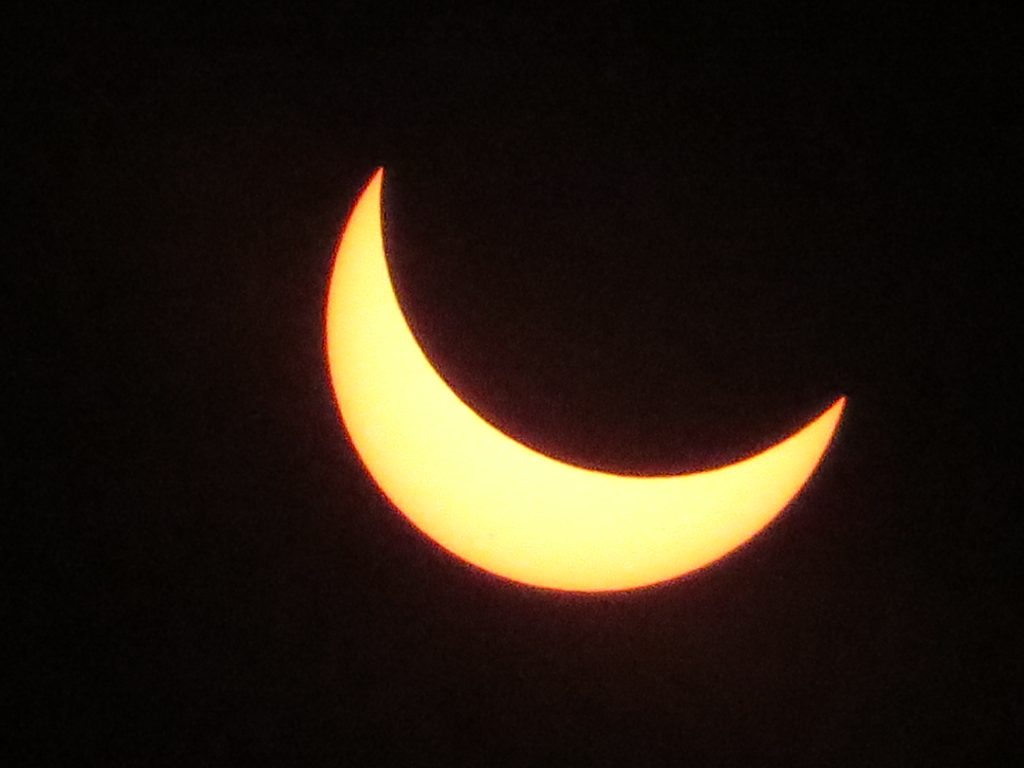 The moon has covered more of the Sun, heading for totality. This shot came at 10:01 am. (T. Jones)

Excitement built among the 300-or-so observers at Lake Simtustus as the moon drove steadily across the Sun’s face. Still, at this point we could see no noticeable drop in brightness outdoors, above. 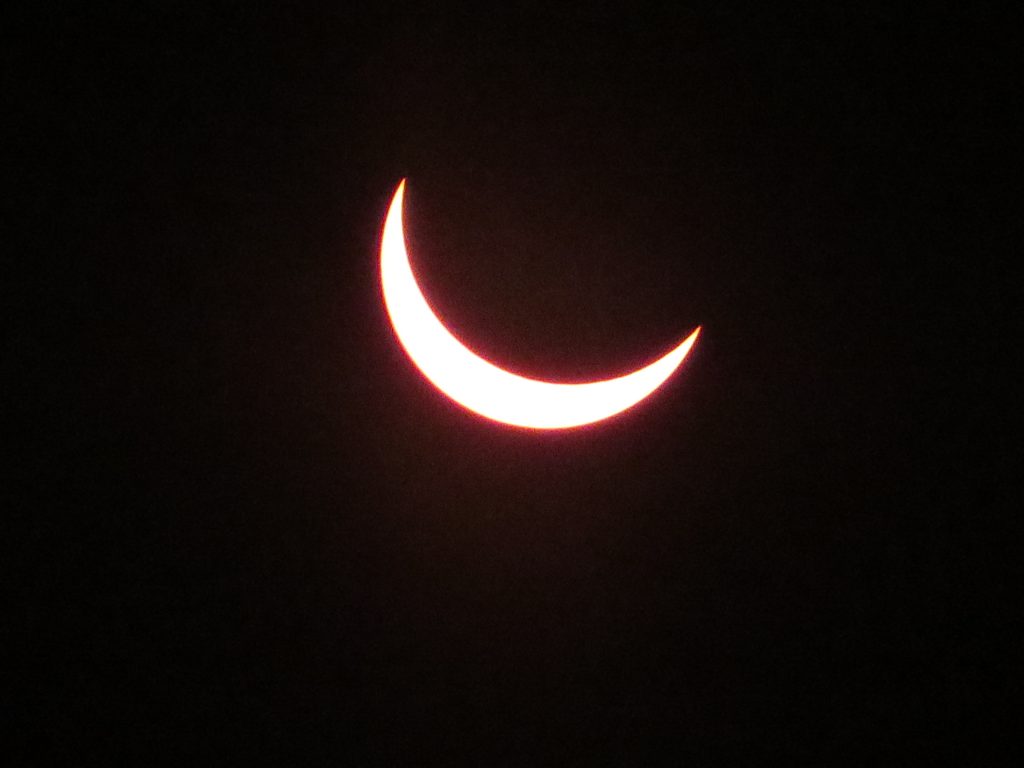 For the above shot, I was still shooting zoomed in through a solar filter over the optics of the Canon digital (SX280 HS), using its “auto” setting to meter for proper exposure. (T. Jones). 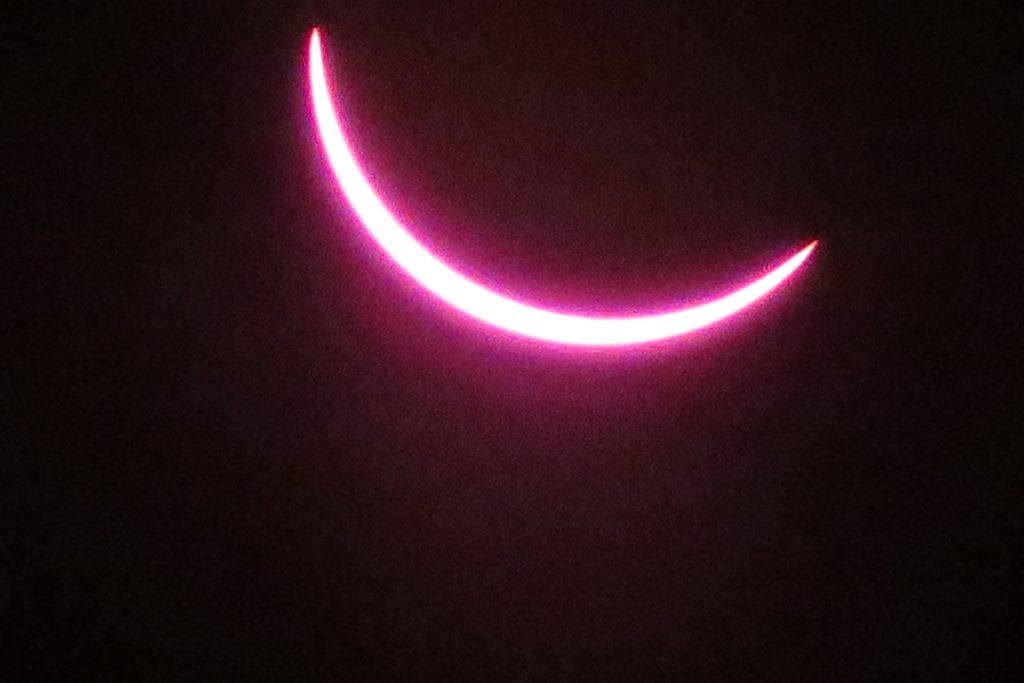 Sun just before totality, at 1017 am. Through solar filter on “auto” setting. (T. Jones)

When I took the above shot, two minutes before totality, the ambient light was dropping rapidly, bathing the desert landscape in a weak, watery, orange-yellow illumination. Everyone noticed this, murmuring about the unfamiliar, weird light levels of the scene. By this point I was getting my settings ready for totality, but there was almost too much going on with the waning Sun to focus on camera set-up. 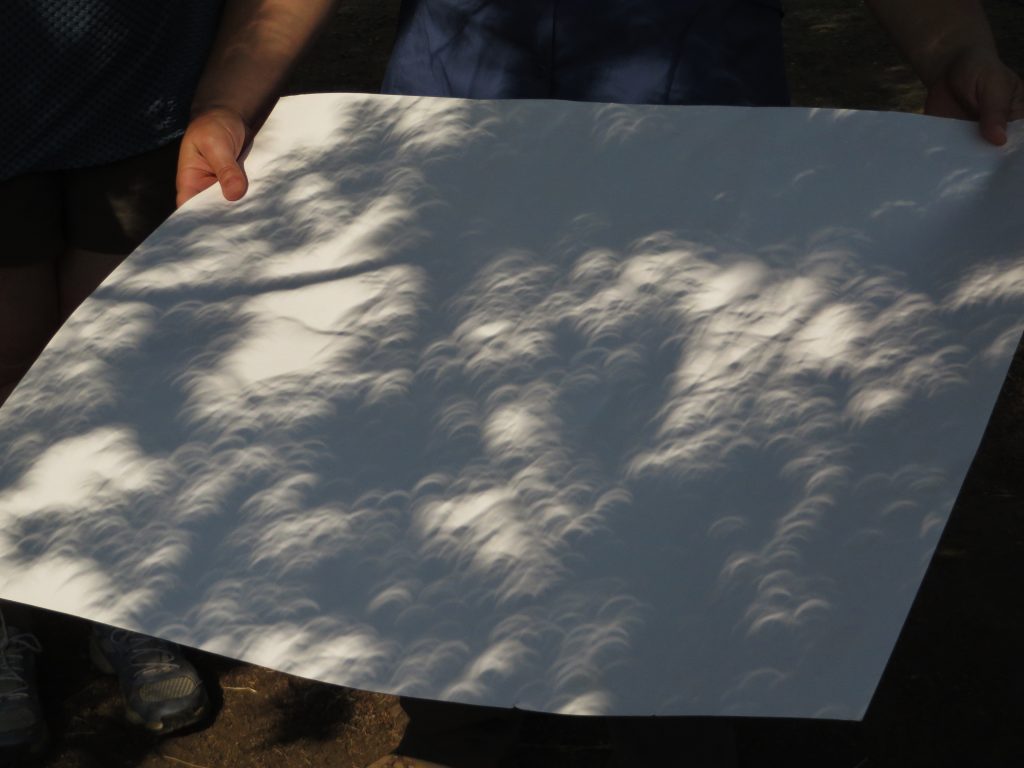 A juniper tree acted as a pinhole projector, throwing crescent solar discs across the ground and onto our whiteboard. (T. Jones)

The waning light is obvious in the above photo, both on the ground and in those hundreds of thin solar crescents. Our daughter Annie noticed the ground crescents and grabbed our white poster board to best see these mini-eclipses. 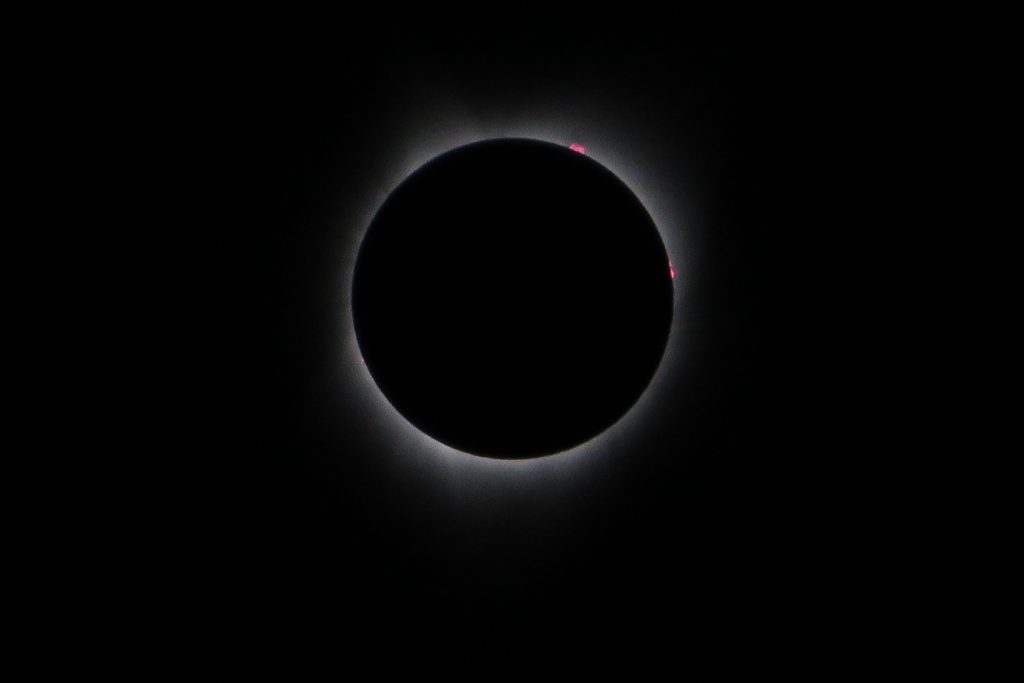 Wow! Didn’t see the prominences until looking at the photos, but some in our group with binoculars spotted these immense arcs of incandescent gas above the Sun’s limb. The fine structure of the inner corona also impressed. 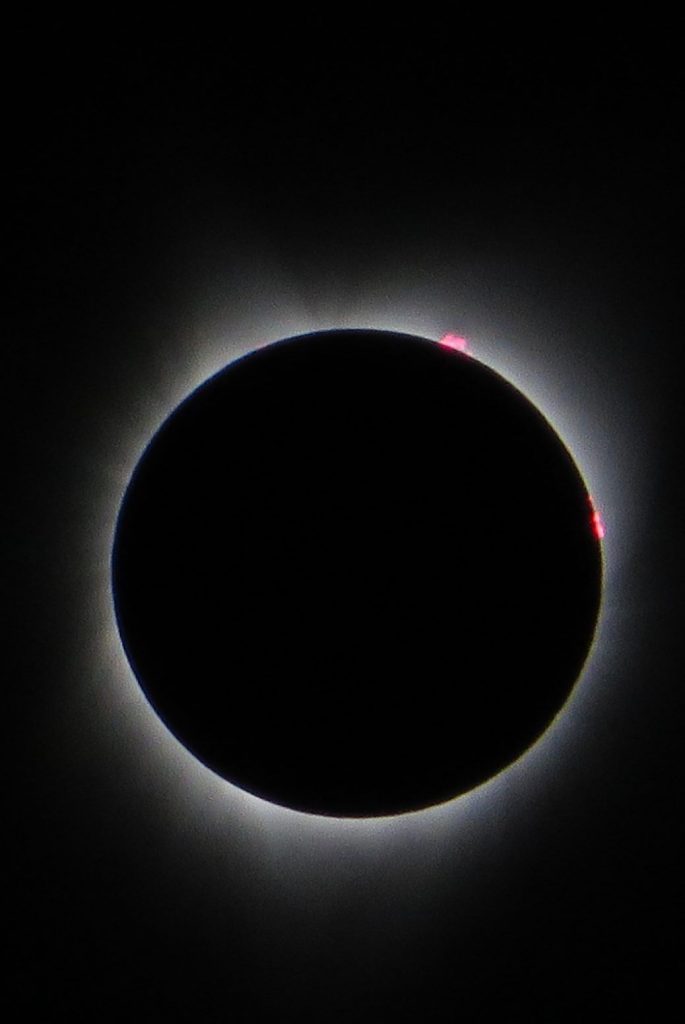 As my exposure time increased, we started to capture more of the corona stretching above those amazing prominences (above). Temperature along the lake front dropped noticeably. One friend, Dan Adamo in Salem, OR, recorded a drop of over 6 degrees F during totality. 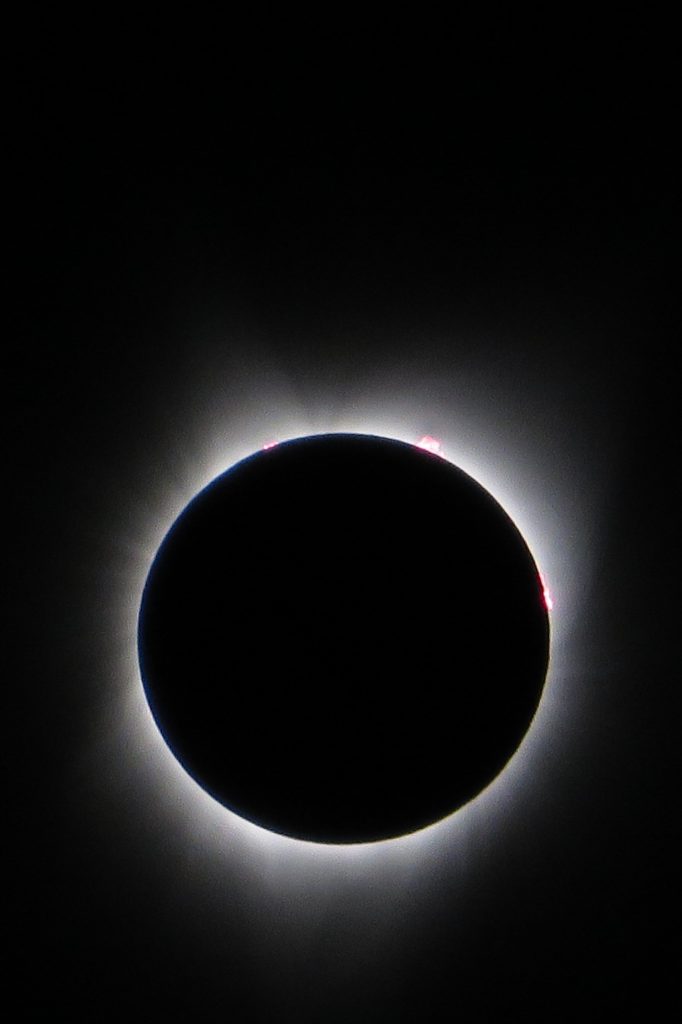 Longer exposure time gets more of the structure of the corona. I was whirling through the shutter speed dial, and using a 2-second delay on the shutter timer to damp vibration on the tripod. And the clock was ticking on me observing the eclipse with my own eyeballs. (I did take long glimpses between these shots). 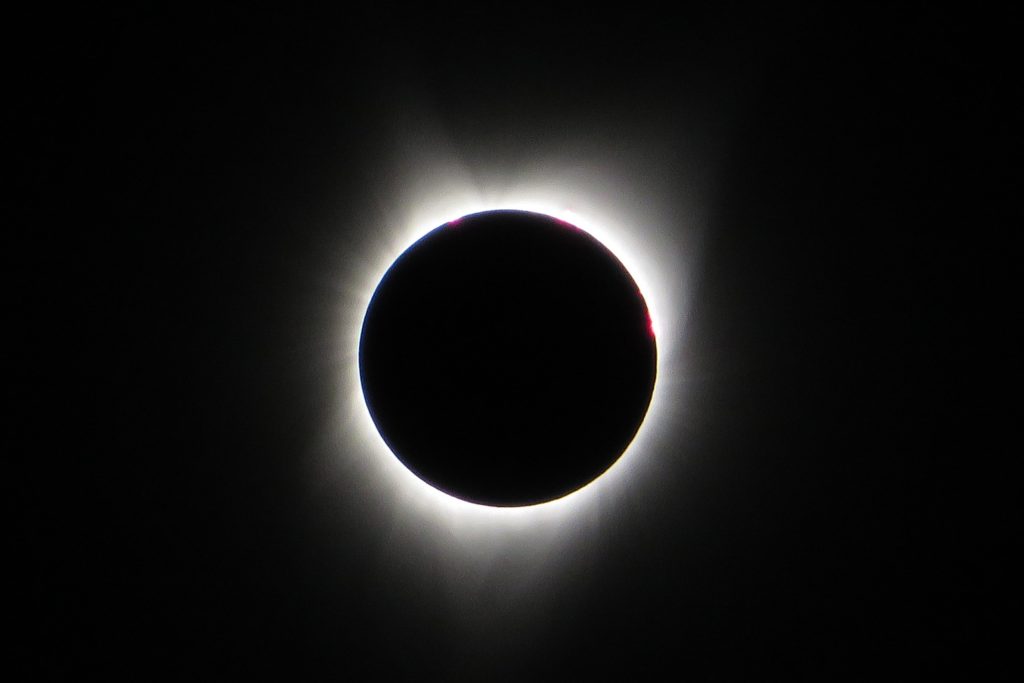 The photo above appears much like the scene we saw of the moon and Sun during the last minute of totality. How incredibly lovely. 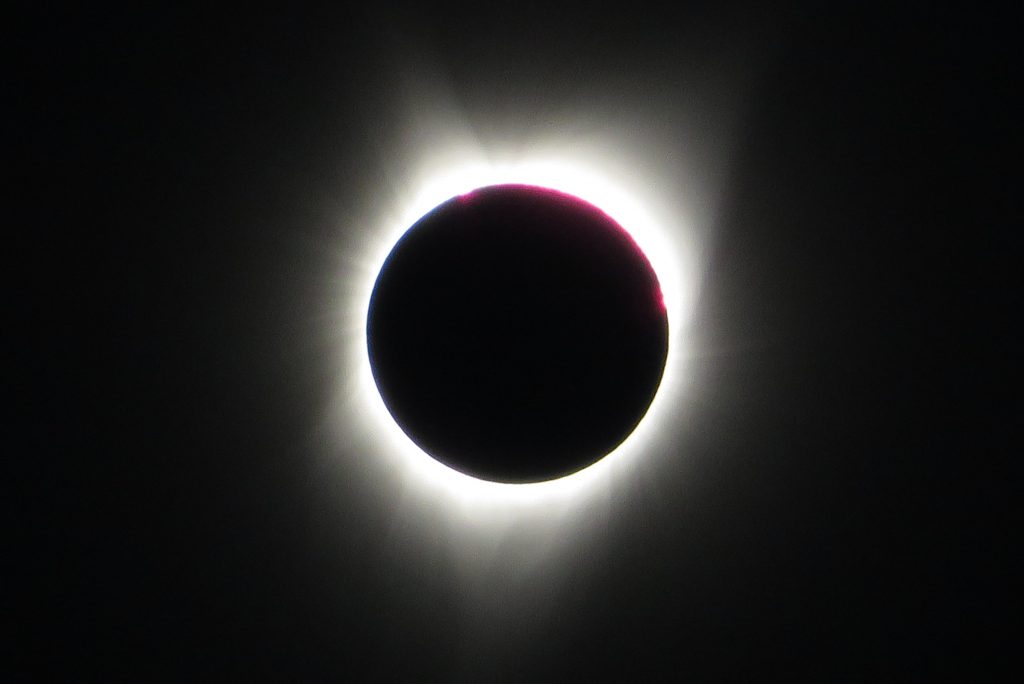 Totality was almost over. The crowd’s murmur rose noticeably as we all anticipated the Sun’s reappearance; emotions ran from exultant to sadness that this vision was about to end. But we were all eager to see what the Sun would show us at eclipse conclusion. 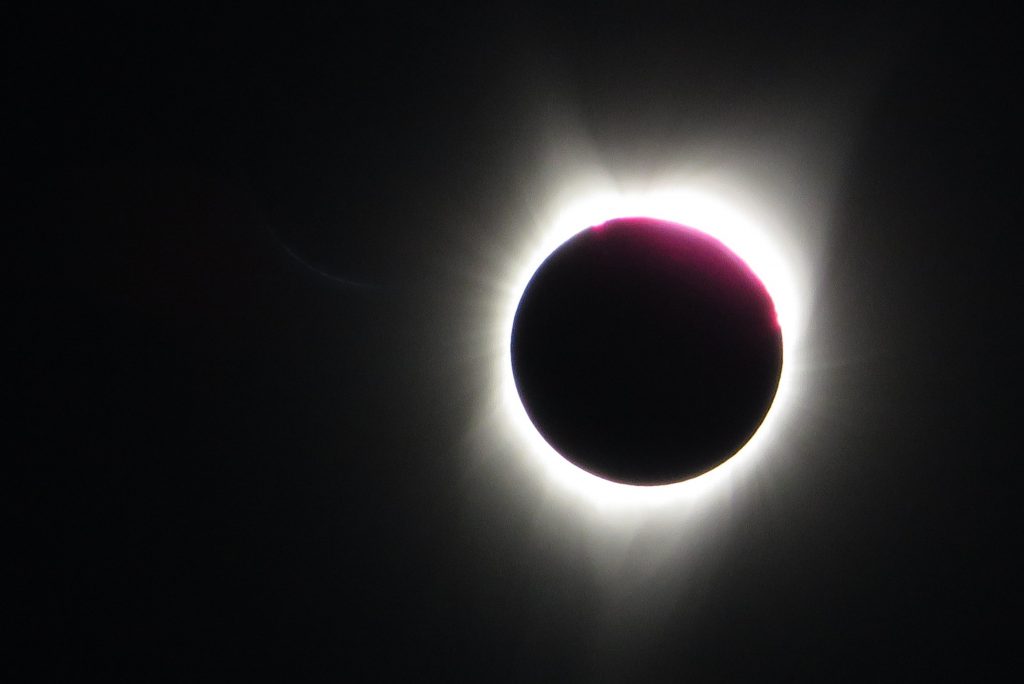 The Sun is just about to emerge from behind the Moon, outshining the chromosphere here (above). Good-bye to the corona, perhaps until 2024. 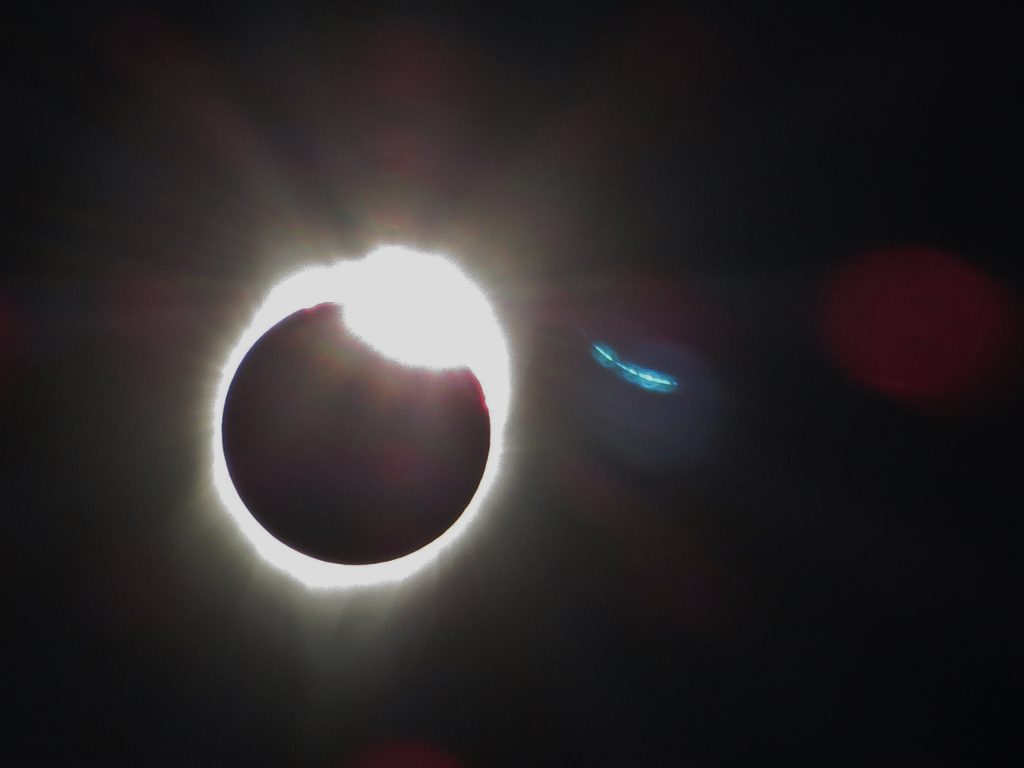 Whoops and cheers swelled as the Sun emerged from eclipse, exhibiting this blazing diamond ring above the Oregon desert. On go the solar glasses again! 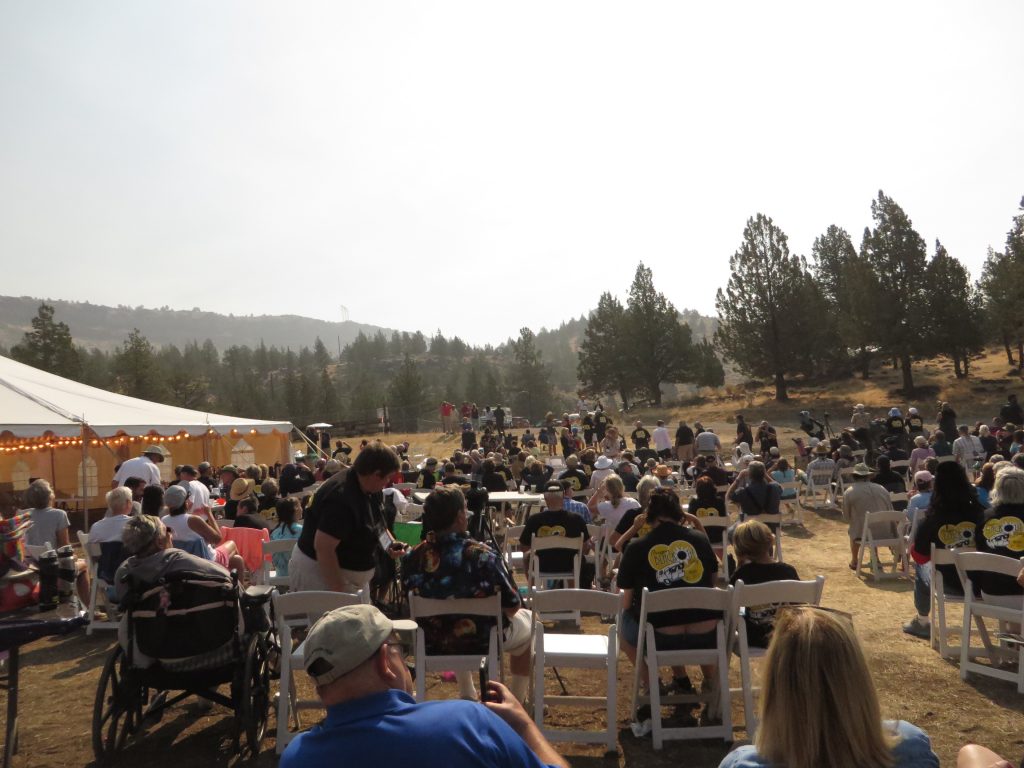 The Sun drenches the viewing area, and out come the eclipse glasses and the cold drinks. 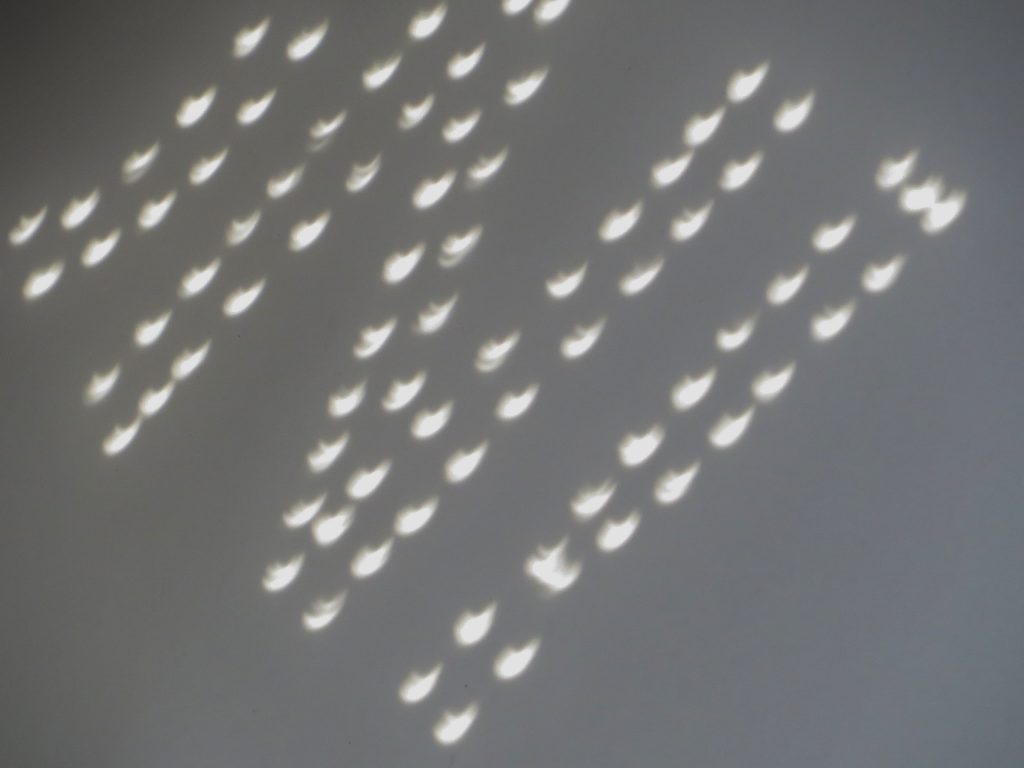 Miniatures of the waning eclipse cast by our pinhole projector. (T. Jones)

With the totality tension gone, all of us could catch up on the eclipse experiences we missed on the way in to blackout. Above are the miniatures of the waning eclipse cast by our pinhole projector onto the poster board. 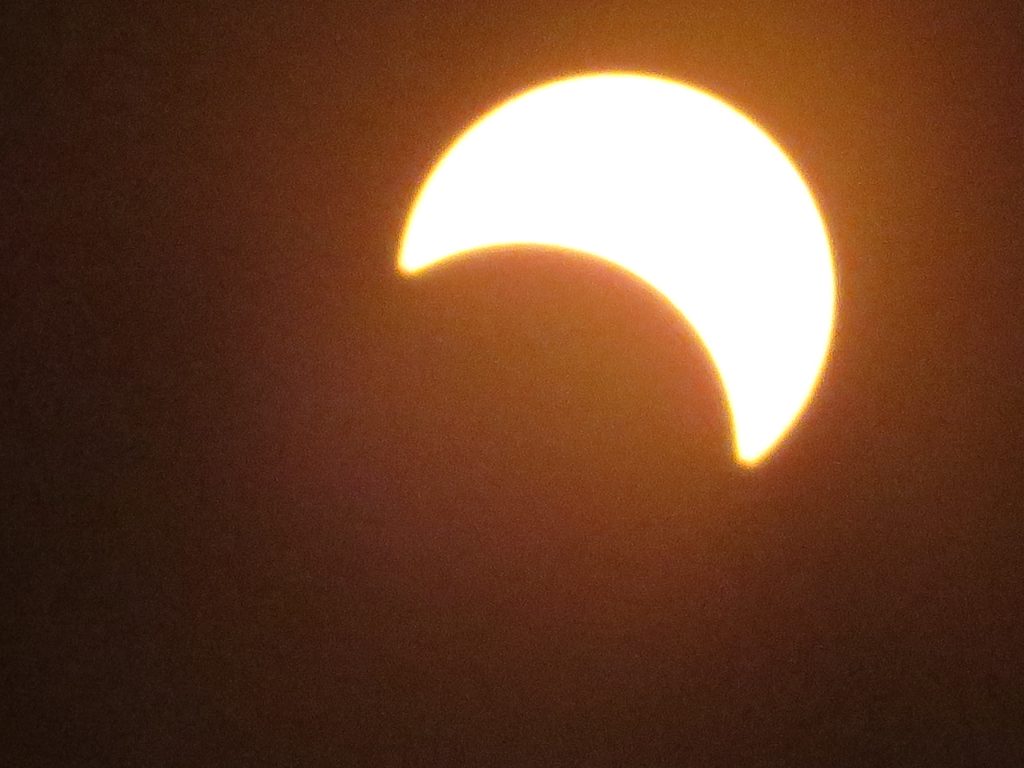 Most of us enjoyed a cold swallow of our iced Coronas at this point, talking excitedly with friends and family about what we’d witnessed. 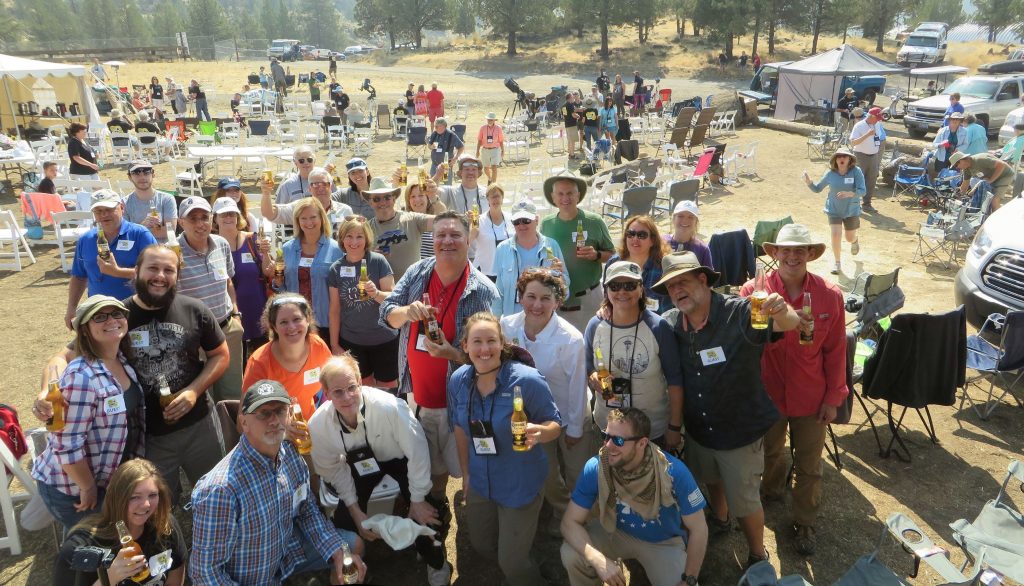 What a success this was for all involved. Note all the telescopes brought by the Blackout Ralliers in background. 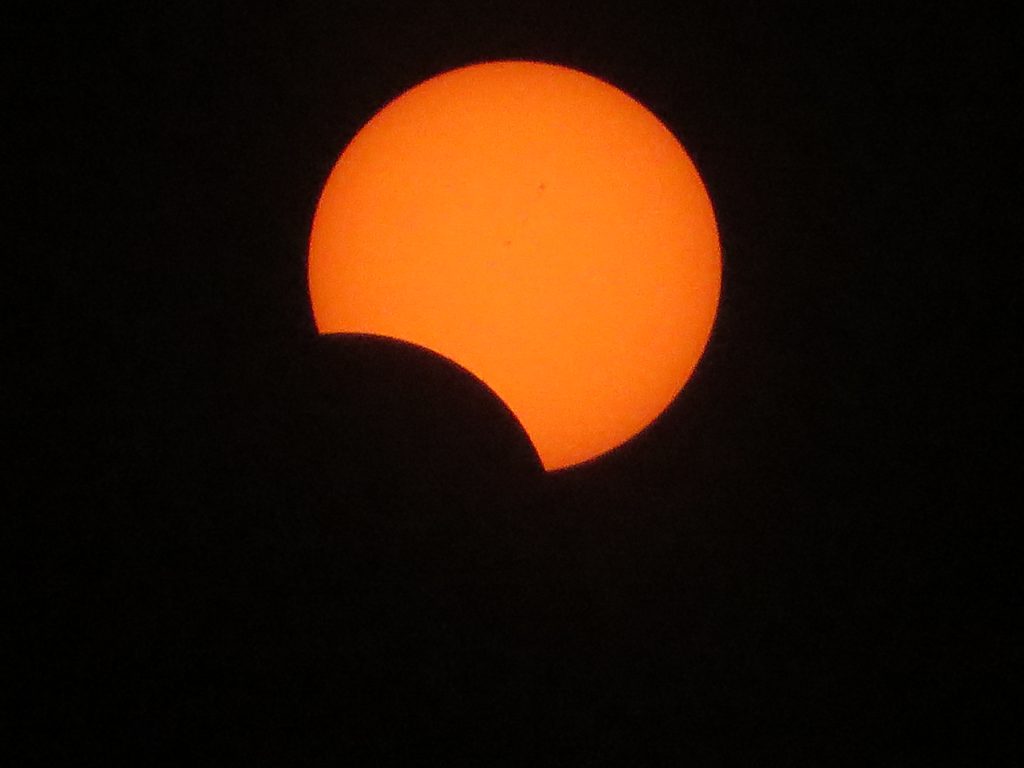 Sunspots make their reappearance as the Moon exits the Sun’s neighborhood. We followed the eclipse’s finish with a picnic lunch, and plotted plans to avoid the traffic heading south out of Madras. I enjoyed giving a talk under the big tent, and met with eclipse-goers at a book signing under the shade of our big juniper at the viewing area, autographing Ask the Astronaut and Sky Walking. 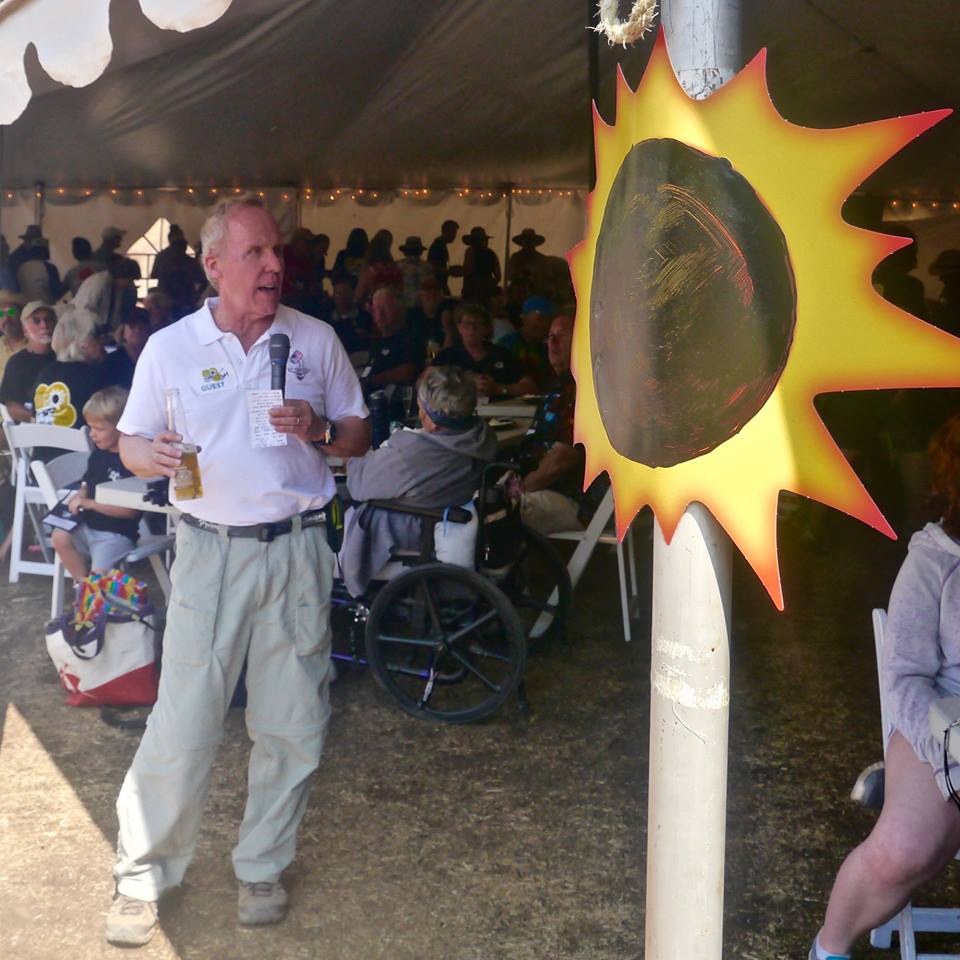 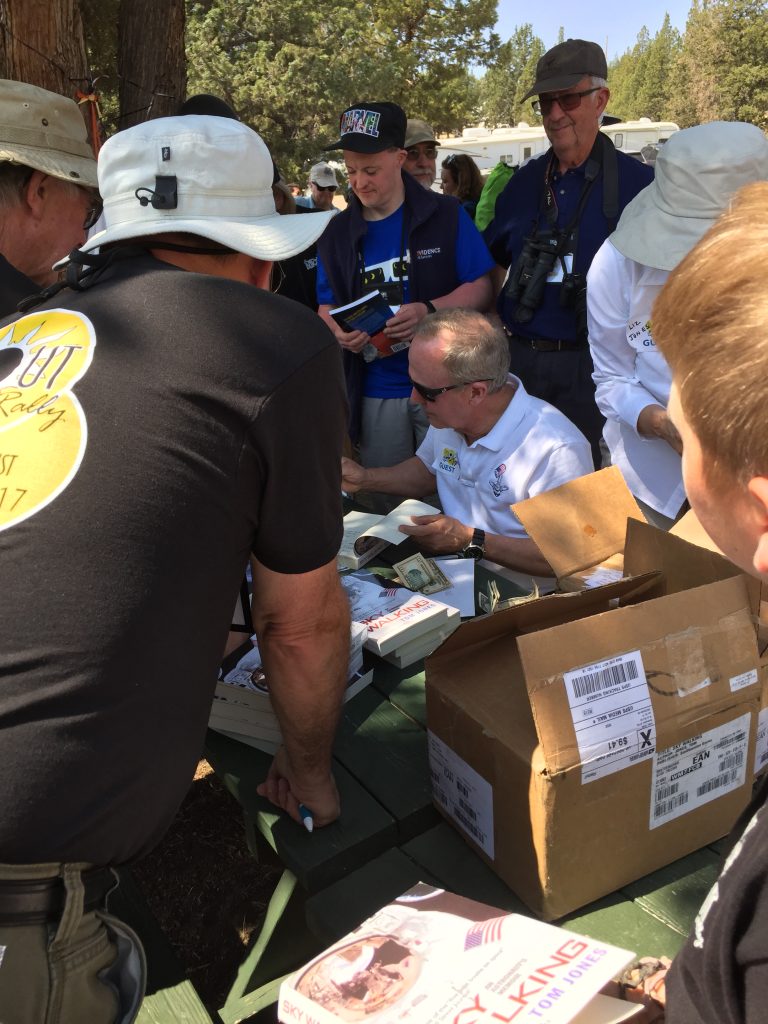 Tom signs copies of his books, under the blessed shade of the big juniper. (Sean Wilson)

We’ll close this eclipse album out with a view of the Moon’s shadow, seen from the International Space Station. For the U.S., so long to totality until 2024. See you in the umbra! 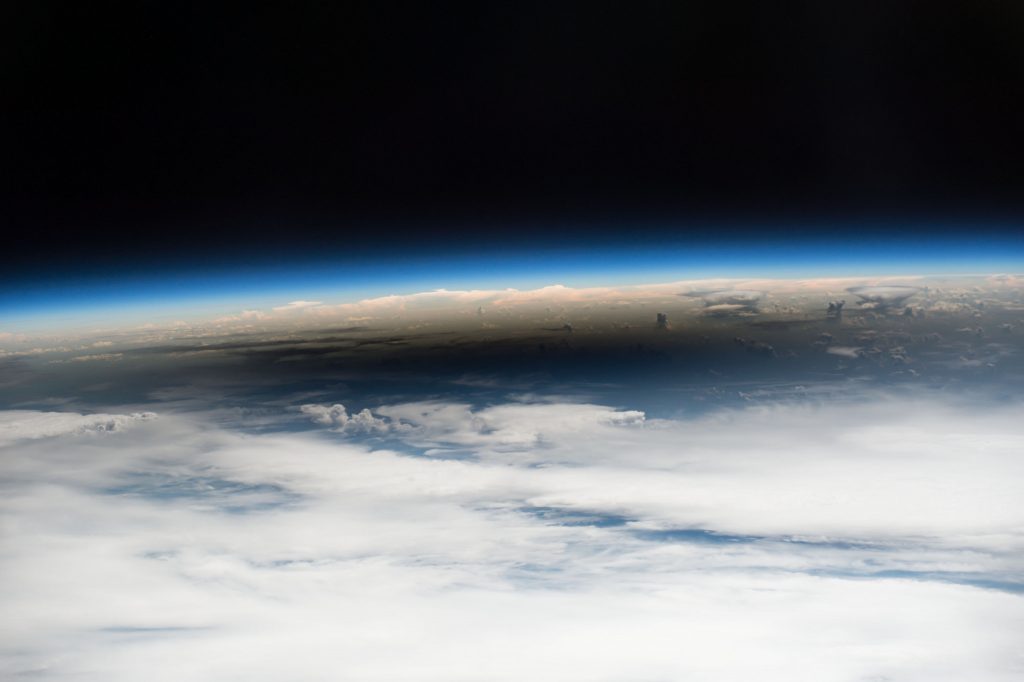