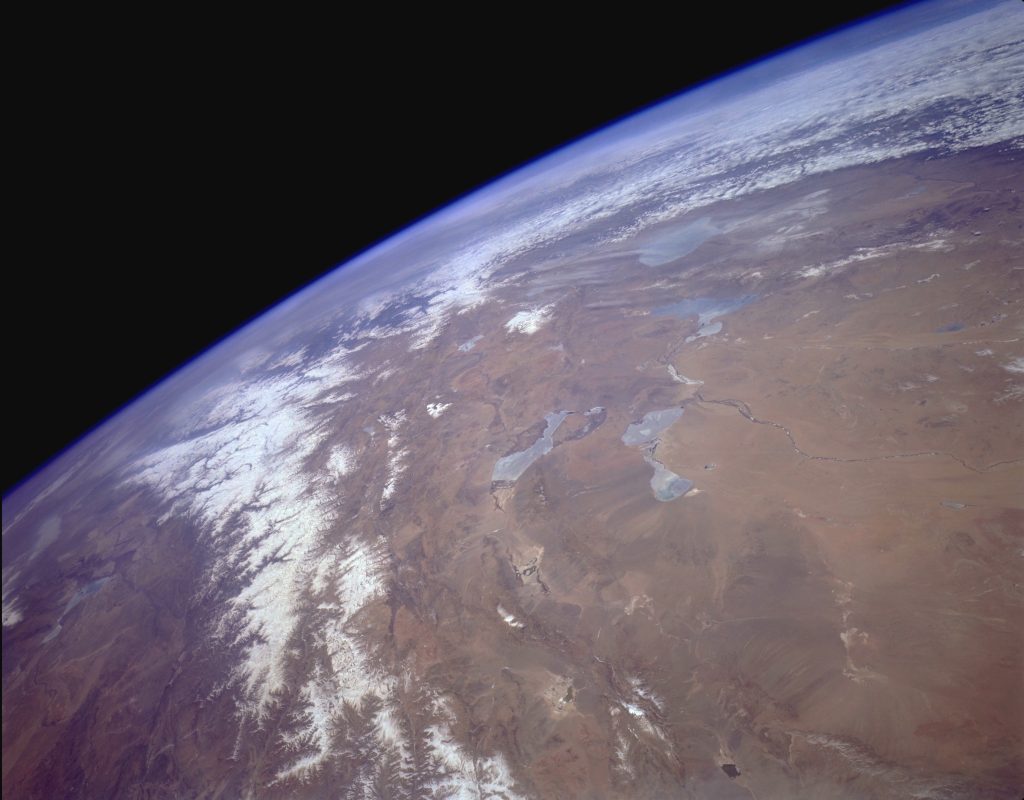 Altai Mountains on the China/Mongolia border,, one of our science targets on Space Radar Lab 1(NASA STS059-L17-31)

23 years ago on STS-59, Endeavour, we were 114 nautical miles up on April 14 when we snapped this 90mm Linhoff image of the Valley of the Lakes in western Mongolia. One of our Space Radar Lab 1 science targets was that snowcapped range of the Altai Mountains at lower left (for geological faulting and glacier studies). North is toward the upper right. These lakes always appeared to us as a string of aquamarine gems strung delicately together, and weather permitting, we saw them as often as three orbits each day on my “Blue Shift” (nighttime in Houston). A good photo for Earth Day.

Here’s the NASA caption: STS059-L17-031 Valley of The Lakes, Western Mongolia April 1994
The snow-covered Altai Mountain system, trending northwest-southeast, straddles the border between western Mongolia and extreme northwest China. The Altai Mountains separate two very large, desert, sparsely inhabited regions—the Valley of the Lakes in western Mongolia and the Dzungarian Basin in northwestern China. The brownish intermontane basin of the Valley of the Lakes region shows an assortment of desert landforms—alluvial fans, inland river deltas, intermittently flowing streams, and dry lakebeds. The four larger lakes captured in this photograph are Uvs (the northernmost lake partially obscured by cirrus clouds); Hyargas (immediately south of Uvs); Hara and Doroo (south of Hyagas); and Har Us (west of Hara). Each of these lakes is fed by the runoff from glaciers and snowmelt from mountains. When this photograph was taken, most of these lakes were partially covered with ice. The intermittently flowing Dzavhan River, which runs generally east to west toward three of these lakes, is a very narrow watercourse that dramatically stands out against an otherwise barren landscape. Two sizable Chinese lakes are visible southwest of the Altai Mountains.