After arrival, one of our first activities was to get a fire-fighting refresher on the various types of flames we might encounter on or around the launch pad. The fire chief and his team then directed us in use of fire extinguishers and smoke protection gear available on the launch pad. 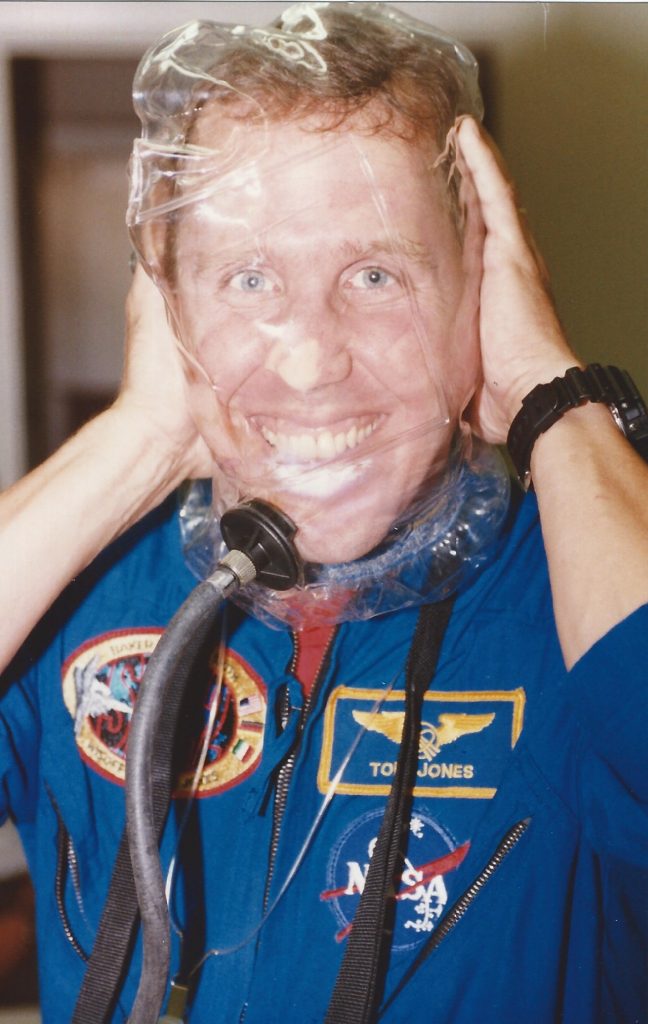 Next day, we received a thorough orientation and briefing on the launch pad’s safety equipment, and practiced the emergency escape procedures which could get us away from the shuttle quickly and safely. Here we practice how to climb down from the slide wire baskets at the end of their run, then make our way to the blast bunker at the pad’s perimeter.

Smith, Bursch, and Jones inspect the release for the slide wire basket at the blast bunker. (STS-68-3)

We all had a chance to drive the M113 APC, below, just in case we had to evacuate an injured crewmember from the blast bunker and get him to a nearby helipad.

Our crew posed on the launch pad next to Endeavour during the Terminal Countdown Demonstration Test activities. This swingarm carries flammable, gaseous hydrogen away from the external tank during launch preparations. It’s amazing to get so close to this massive machinery, even more startling to realize you’re going to ride it off the planet. 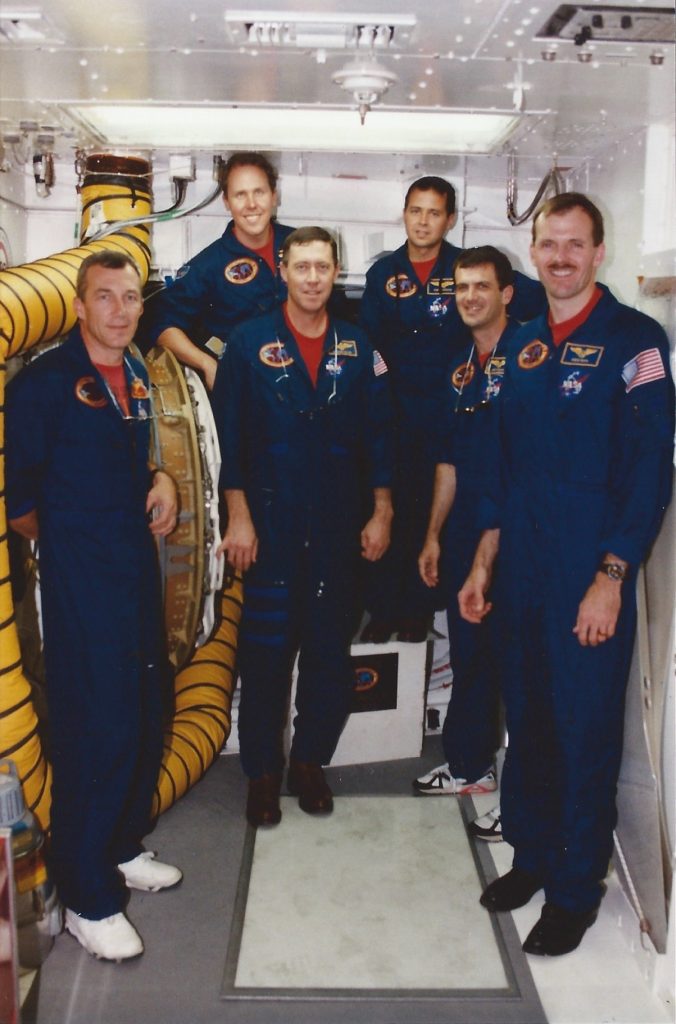 STS-68 crew in White Room during TCDT, July-Aug 94. From L, Wilcutt, Jones, Baker, Bursch, Wisoff, and Smith, in front of the Endeavour hatch. 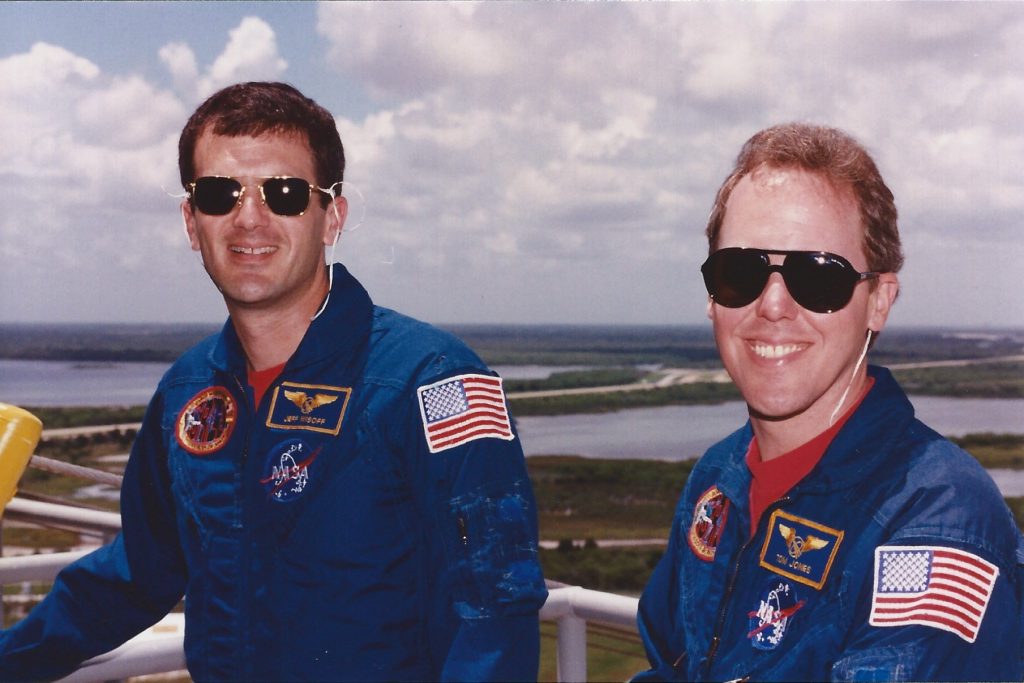 Following lunch back at crew quarters, we headed back to the pad for an afternoon press conference near the blast bunker on the pad perimeter road.

On the shot below, the slide wires for the escape baskets are visible, reaching back to the 195-foot level at Pad 39A. It was a hot August day on the Florida Space Coast.

Tom Jones and Terry Wilcutt listen to questions from the press after TCDT. (NASA STS-68-2) 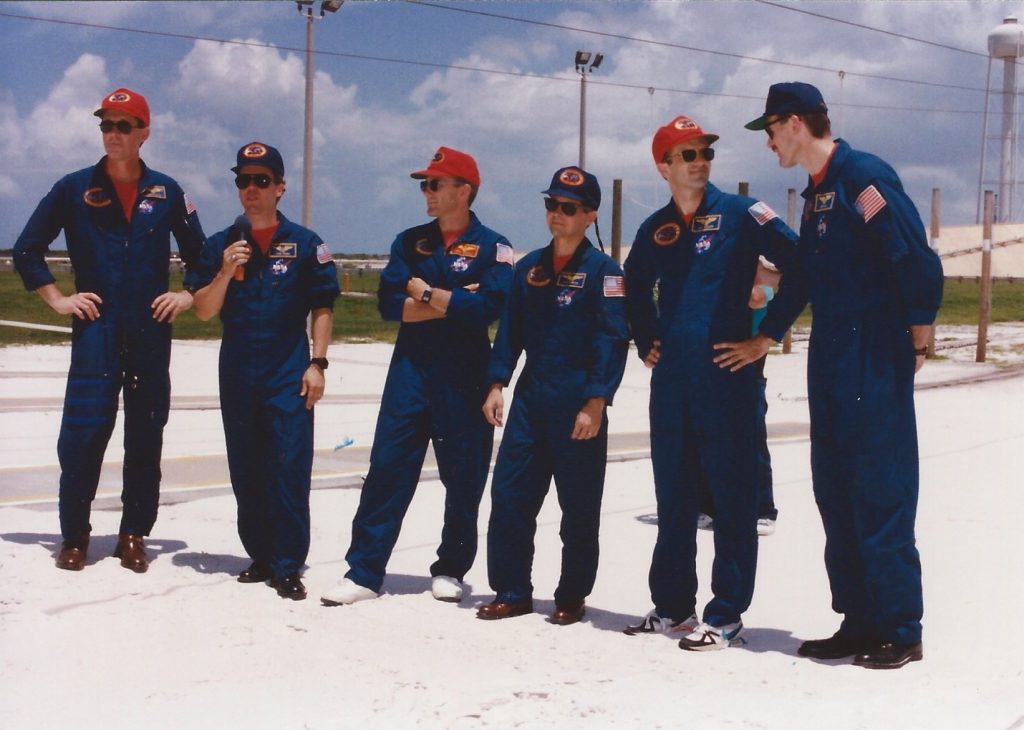 Back at crew quarters, we all worked with our suit technicians to complete the testing of our Launch and Entry Suits (LES) for the mock countdown the next morning. Here I am wearing the inner pressure garment of the LES; the orange outer covering is attached after these pressure checks are completed. 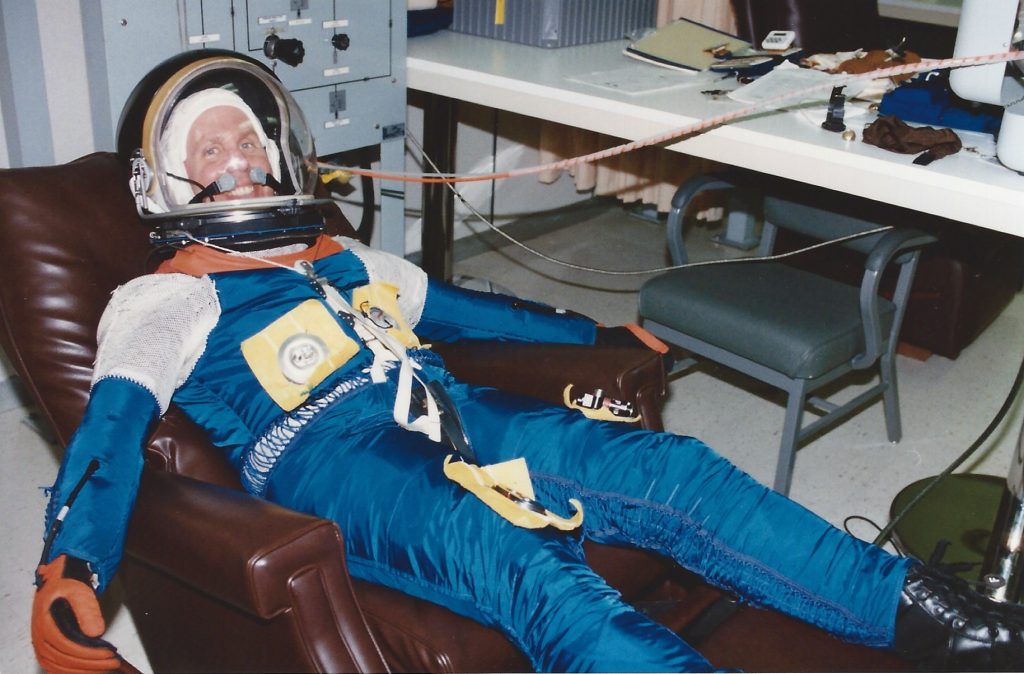 The AstroVan (below) is now on display near Atlantis at Kennedy Space Center Visitor Complex. Will it roll again? Here we’re loose and joking, but the atmosphere’s a little more tense on the day of the real ride to the launch pad.

Inside the AstroVan on the way to the launch pad during TCDT, August 1994. L to R: Wisoff, Bursch, Wilcutt, Baker, Jones, and Smith. (NASA)

As we waited for our strap-in and countdown rehearsal aboard Endeavour, we took some photos atop the launch pad.

Steve and I would work on the Blue Shift together with Dan Bursch while in orbit. Steve rode uphill in the MS-1 position on the flight deck, next to flight engineer and MS-2 Dan Bursch. Our countdown rehearsal ended with a mock pad abort and an emergency egress from the crew module to the escape slide baskets on the western, or far side of the 195-foot level. 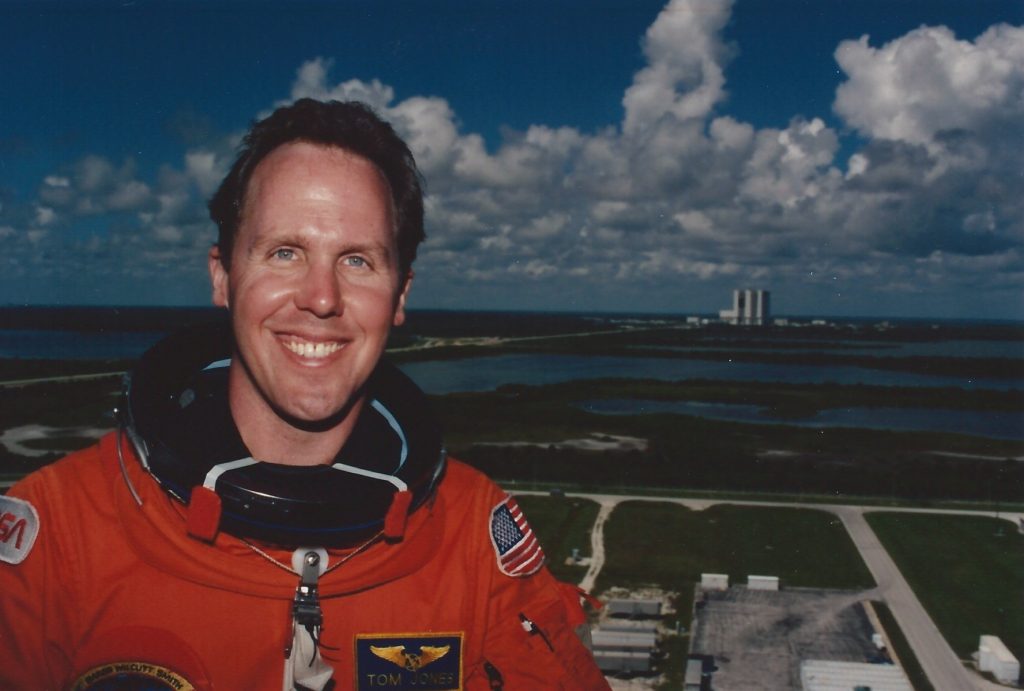 Tom at the 195-foot level of Pad 39A after our countdown demonstration test and emergency egress drill concluded. That’s the Vehicle Assembly Building in the background.

After our pad abort on August 18, we were all eager to go. Here are the four “Hairballs” from the 1990 astronaut group flying on STS-68: Jones, Wilcutt, Wisoff, and Bursch. In the background of the suit room, we see Hoot Gibson (chief astronaut) in the blue flight suit, with tan-suited Dave Leestma (chief of Flight Crew Operations) on the right. We would shortly walk to the Astrovan for our ride to Pad 39A.

Tom and LIz Jones tour Endeavour at Launch Pad 39A a couple of days before launch of STS-68. (photo by Rich Clifford, NASA)

In the photo above, LIz and I posed in front of Endeavour as part of our spouse’s tour before heading to night viewing with our friends and family. We were able to see the ship from top to bottom, from the White Room down to the flame trench beneath the mobile launch platform on Pad 39A. Likely taken Aug. 17, 1994. For more info on STS-68, see: http://www.AstronautTomJones.com