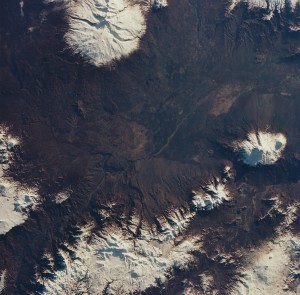 Early spring shows lingering snows on the mountains of far eastern Turkey and its border region with Armenia. Mt. Aragats, a dormant volcano in Armenia, is at top in this photo, at 13,419 feet. North is to the upper left. At far right center is the twin-volcano plateau of Mt. Ararat, which last erupted in 1840. The river angling from lower left to upper right is the border between Turkey and Armenia, the Aras, flowing east toward the Kura and the Caspian Sea. The frozen, volcanic lake in the mountains at lower center is Balik Gulu, or Fish Lake. The Armenian capital, Yerevan, is located just east of a line between Ararat and Aragats, between the river and the center/top/right of the photo (I can’t see it very well).

Ararat is 5,137 m (16,854 ft) tall, and is the traditional resting place of Noah’s Ark. This entire eastern region of Turkey and Armenia is full of volcanoes, rugged mountains, and tectonic faults that generate massive quakes. Our crew on Space Radar Lab 1 mapped such tectonic faults across the entire sweep of the continents. STS-59 flew from April 9 to April 20, 1994. These photos keep my memories of that mission crisp.